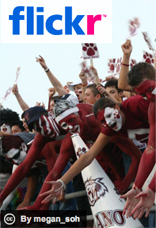 Flickr is now multi-lingual with the launching of its product in seven languages. Along with English, Flickr web sites now will be available in French, German, Korean, Italian, Portuguese, Spanish, and traditional Chinese.

“This is something we wanted to do a long time ago. It is also one of our most requested features. Tech enthusiasts in Buenos Aires, Paris – all over the world – use Flickr but for their families and friends it has been a pain in the butt,” Butterfield said. “Now the grandma who doesn’t speak English at all can take advantage of our features and more easily do things such as save her grandchildren’s pictures or upload some of her own,” Flickr founder Stewart Butterfield said.

Butterfield estimated that with the expanded languages Flickr now had web pages tailored to 90 percent of its users. Approximately 24.8 million people visit Flickr monthly, according to marketing research firm comScore.