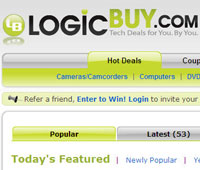 Logic Media has launched what it is a calling a hybrid tech deal Web site for using community members to find and rate shopping deals online. LogicBuy.com is designed to help shoppers find the lowest prices on electronics, video games and computers.

LogicBuy.com uses its community and a team of editors to rate submitted deals offered by popular online merchants. Editors look for the latest deals to post on the Web site while community members also shares potential great deals they have found in their Web explorations.

Deals, once posted, are voted upon in a “Hot” or “Not” style format. Those deals which get more positive feedback appear higher in the listings, while deals considered to be “Not” get buried because they are not considered as compelling.