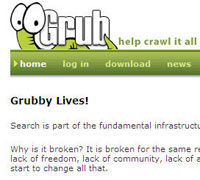 Wikia co-founder Jimmy Wales waded deeper into open source territory today as his company announced it had acquired Grub, a distributed search project. Financial terms of the acquisition were not revealed.

Grub, acquired from LookSmart, works under a model of users donating their personal computing resources towards a common goal. The application has been released under open source license by Wales and company for download and is “designed with modularity so that developers can quickly and easily extend and add functionality, improving the quality and performance of the entire system.”

Grub, described as “a massive, distributed user-contributed processing network,” is being combined with the open source Search Wikia project and is seen as a large step “towards a future where search is open and transparent.”

“Weâ€™ve had a tremendous response from very interesting commercial players in the search space,â€ said Wales. “The desire to collaborate and support a transparent and open platform for search is clearly deeply exciting to both open source and businesses. Look for other exciting announcements in the coming months as we collectively work to free the judgment of information from invisible rules inside an algorithmic black box.”