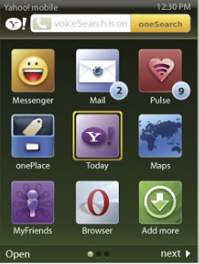 Mobile World Congress 2009 is on so it is only fitting that after MySpace announced the launch of a new mobile site, here comes Yahoo as well.

Yahoo announced, you guessed it right, the upcoming launch of its new Yahoo Mobile, an app developed for the Apple iPhone, and as an app developed for smartphones from Nokia, RIM, Samsung, Sony Ericsson and Motorola as well as those powered by Windows Mobile. Yahoo! Mobile initially will be available through a managed beta program, with general availability expected in Q2 2009.