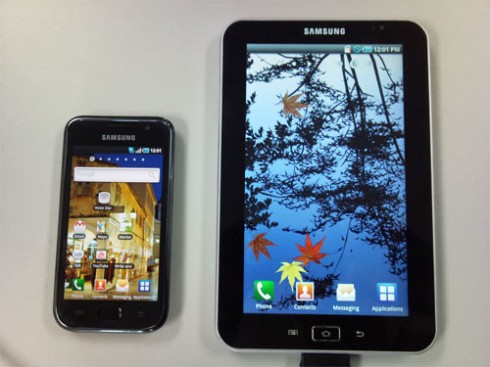 Unlike it’s iPhone 4 brother, the iPad continues to enjoy success in the hands of everyone who possesses one.

Unfortunately for Apple, it’s rivals are once again full of iJealousy, which means that we may see a decent Android tablet (pictured on the right) later on this year.

Samsung’s next buzzy product launch will likely be its tablet computer, dubbed Galaxy Tab. The touchscreen device is said to sport two cameras for video conferencing, as well as GPS, Wi-Fi and a 3G data connection. Because it also runs Android, the tablet will be able to communicate and share content and applications with Samsung’s Galaxy S phones. Samsung says the tablet will go on sale before October. (Forbes)

Will Samsung’s Galaxy Tab force the iPad off into the eWilderness of eternalÂ despair? Probably not, since Apple’s iPad is well stocked with numerous quality apps (and quality apps is what sells Android Fanboys).

It will be interesting to see whether an Android tablet convinces even more users to create Android apps for the Galaxy Tab, although hopefully the Android apps will be geared towards a larger screen and not “super sized” for the tablet.

Depending upon the price, the Galaxy TabÂ (which is apparently itsÂ unofficial name)Â could help Samsung (as well as Google) expand its market to the not so affluent, which could help the hardware giant survive in the iAge that humanity seems to have entered into.