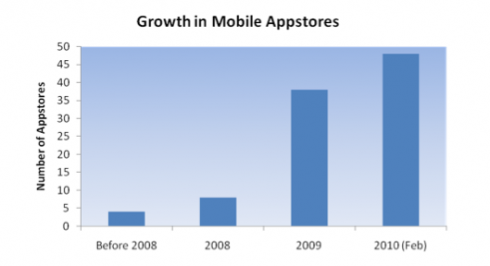 Since everybody in the mobile tech scene are all agog about mobile applications right now, here’s an interesting report called – Sizing Up the Global Mobile Apps Market. According to the study, the overall mobile apps download could grow at the rate of 92% from 7 billion in 2009 to almost 50 million by 2012.

In terms of revenue, mobile ads and virtual goods is expected to bring in 62% more from a mere $4.1 billion in 2009 to around $17.5 billion by 2012. Â These include revenues from both paid and free apps. Â Free apps developers get to earn through mobile ads peppered on their applications’ interfaces.

The study also highlighted the contributions made by Apple’s Apps Store in sparking new interests into mobile apps. Actually mobile apps have been around since the nineties, but only reached its peak of success when Apple launched its Apps Store. True enough, we’ve only heard about the Google Android Market recently. And soon after the BlackBerry App World, WebOS apps market, and even Nokia’s Ovi store which houses its mobile apps gained some recognition and online mileage.

To achieve this growth, creative strategies should be implemented by countries to attract new customers and different business models since the dynamics of the app market varies in emerging nations. The mobile apps ecosystem will prosper if some actions to enhance discovery, improve user experience, drop price barriers and increase developer revenue share are adapted.