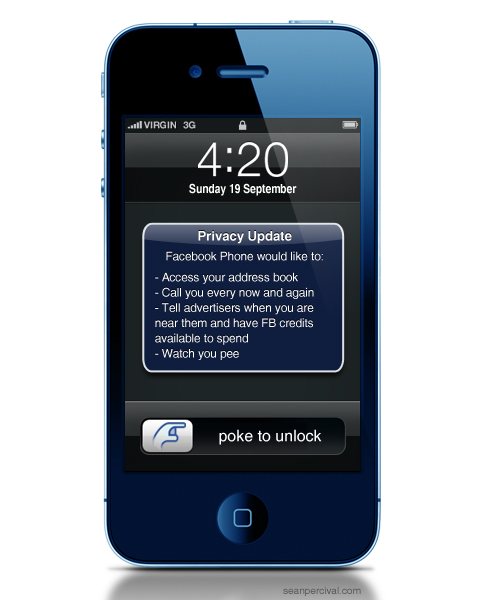 After rumors of a “Facebook phone” surfaced, the blogosphere (this author included) went crazy over the thought of a social network launching its own personalized mobile device.

Although more details have emerged regarding the makeup of a phone (including the fact that Android will be used to power the device), Facebook should probably avoid branding its name on the device, and discourage others (media included) from calling it a Facebook phone as well.

Even though the phone itself would not be designed “start from finish” by Facebook, people may not be thrilled with “the idea” of Facebook intimately knowing who they are talking too.

This could initiate a public backlash against the company, as privacy groups and conspiracy theorist would use the device as a rallying point to prove “how evil” Facebook is.

It would be wiser to let the own manufacturer (or carrier) to brand the phone itself, which would help alleviate fears regarding the company.

Remember when Google first launched the Nexus One? Despite fan fare online from a variety of tech geeks, the smartphone (dubbed a super phone by Google) was more or less a flop.

Despite the company’s global popularity, a smartphone may not be welcomed by a cautious public, which could impact sales of the device.

A public failure would be a major setback for the company, one that might be harder to overcome later on if Facebook decides to enter the mobile business later on.

Lets face it (no pun intended), a Facebook Phone would probably stir up another temper tantrum from Steve Jobs, who could mysteriously delay critical updates to Facebook’s native iPhone app in order to strike back at the social network.

Facebook could face a similar reaction from other companies (like Palm, RIM’s Blackberry, Nokia, etc.) who would probably resist Facebook’s attempt to dominate the mobile verse.

What If Users Want One?

Facebook would probably be wiser to letÂ manufacturesÂ create a device that deeply integrates with Facebook than to risk damage to their brand as well as another silly lawsuit from a privacy organization.

While a phone heavily embracing the social network is a great idea, Facebook may want to wait a bit before committing their name upon an device.