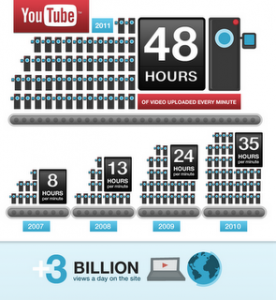 After six years ofÂ existenceÂ Google’s social video king still remains on the thrown, as the YouTube team revealed a couple of impressive stats regarding the site’s popularity.

Today,Â more than 48 hours (two days worth) of video are uploaded to the site every minute, a 37% increase over the last six months and 100% over last year. […]

Weâ€™re amazed that over this last weekend, you drove YouTube past the 3 billion views a day mark, a 50% increase over last year. Thatâ€™s the equivalent of nearly half the worldâ€™s population watching a YouTube video each day, or every U.S. resident watching at least nine videos a day.Â (Official YouTube Blog)

While YouTube has pioneered the path towards making videos more social, the service has yet to embrace live streaming en masse (although they do allow select partners to broadcast videos in real time).

Note: It will be interesting to see if rivals like Microsoft (who just purchased Qik) will make a second attempt to challenge YouTube in the future, or leave it up to Facebook to steal Google’s crown.