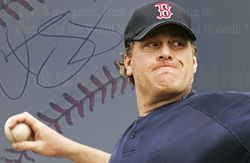 Red Sox star pitcher Curt Schilling lashed out at the media in a scathing 1,300-word post on his personal blog and offered $1 million to anyone who would prove that it was not blood that blotted his sock in the 2004 playoffs.

Schilling’s sock was put into question when Baltimore Orioles broadcaster Gary Thorne said Red Sox catcher Doug Mirabelli had told him it was paint, not blood, done for a publicity stunt. Thorne later said that he had misreported what he overheard. Despite this, Schilling still ripped Thorne and the media through his blog.

Anyone interested in Schilling’s offer? Go look for the sock first as Schilling said he put it in the laundry. Now he suspects a Yankees clubhouse employee still has it.

Sony Corp. launched a video-sharing site in Japan where users can share videos and blog about them, creating a potential rival to Google Inc.’s YouTube. It’s not a little late for Sony. It’s late.

The eyeVio site allows users to upload video clips, watch those of other members and subscribe to channels featuring content from commercial providers as well as models, designers and writers. Sony said it would carefully monitor the videos uploaded by users. How? It was not explained.

Its mission is simple and wrapped up with its motto: “Share a story. Change a life.” Happy Posts has struck a chord with the Internet community as the new hangout place for positive and uplifting content. The site, a radical change from what normally is seen online, is an open forum for people to share positive stories from their lives.

“Every day, we are hit from all sides with negativity,” said Mark Hager, founder of Happy Posts. “We wanted to create a place where anyone from any background could tell about the good things that happen to them. We’re not concerned about where you’re from, what you do or what you believe,” Hager said when asked about their target demographics. “We’re looking to create a grass-roots movement with the sole purpose of creating the world’s largest repository of every day miracles.”

Splash News and Picture Agency, Bauer-Griffin, Insight News and Features, Flynet Pictures, and London Entertainment Pictures filed the lawsuit in the federal district court in California, claiming more than 25 counts of infringement. The group is asking for $7 million in damages. Ouch!

“Perez has achieved his fame and fortune by unlawfully taking and exploiting other people’s work,” said Splash News’s CEO Gary Morgan in a post on the company’s blog. “Using someone else’s only means of earning money to make yourself rich at their expense is most un-American.”

“The black community needs a blog of its own like Stereohyped,” says editor Lauren Williams. “Whether we’re dealing with the Don Imus scandal or
potentially welcoming the first black president with Barack Obama, African-American readers are craving a news and entertainment site that’s entirely dedicated to them. Nowhere else on the web is there something like Stereohyped.”

“Launching a blog for the black community just makes sense,” says Stereohyped’s publisher David Hauslaib. “We’re heading into this with creative people holding degrees in African-American Studies, an appetite for informed analysis, and plenty of experience with gossip,” he says. “We’re bringing a great editorial mix to Stereohyped. And in the end, serving our black readership will matter most.”