“Black Blogs”, blogs that partake in “questionable materials” such as “sexual images and language” have resulted in a new investigation into this perverted form of internet abuse by the Investigation Agency of the Vietnamese Ministry of Culture.

According to Vietnam Net Bridge, Mr. Vu Xuan Thanh, Chief Investigator for the Ministry, said that blogs in Vietnam are growing too fast for the Ministry of Culture and Information to manage and that consequently, the agency has recently dispatched a team to research blogs in order to find out ways for the Government to manage them.

He noted that although blogs are not illegal in Vietnam, that Regulation 55 and Circular 02 issued by the Ministry of Culture and Information prohibits Internet content that are the opposite to social and Communist Party values.

Blogs noted as containing “questionable material” include a blog by “Lustful Gentleman”, who is rather impartial to sex, and another blog by the name of “conxionâ€™s world” who has “sexual pictures” some of which “are too much for words”.

Interesting new report from ebiquity on spam blogs. Nothing most people didn’t already know, but digging deeper you find this: 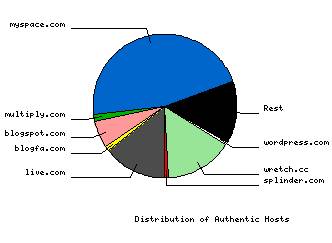 “MySpace is now the biggest contributor to the blogosphere. The other key driver LiveJournal and blogs managed by SixApart (as seen at their update stream) contribute only 50-60% of what MySpace does. The growth of MySpace blogs has in fact dwarfed the growth of splogs! Further if MySpace is discounted in our analysis close to 84% of all pings are spings!”

In Octobers State of the Blogosphere report, David Sifry reported that Technorati was tracking 57 million blogs. I can’t find a more up to date figure on the Technorati site (they seem to have buried it somewhere), but even if we say Technorati is tracking 60-70 million blogs now, how does this compute:

Every MySpace blog comes complete in Technorati with “name – MySpace Blog”, so every post from a MySpace blog has MySpace in the name of the blog…and all Technorati found was 5.353 million references, and yet the ebiquity report indicates that MySpace blogs + posts make up nearly half of the blogosphere and is growing at the fastest rate. Last figures I heard for MySpace usage was 170 million + members. That’s a lot of blogs. Technorati still isn’t tracking even 5% of them.

So next time the State of the Blogosphere report comes out from Technorati, make sure you report the figures correctly: there isn’t 60-70 million blogs out there (or what ever the figure Dave Sifry reports), the figure is ONLY what Technorati tracks, and they’ve still got a long way to go on that front as well.

For all the suspicion and potential conflicts of interest in the past, TechCrunch’s Michael Arrington proves he’s all class, and indeed one of the good guys with this post where he links to a new site called Michael Arrington Sucks. It takes a depth of character to be able to link to something like this, particularly when the combatants are playing the man with the site title as opposed to the site (TechCrunch) itself. Of course the odds are firmly in Arringtons favor given how long other anti-TechCrunch/ Arrington sites have lasted. Perhaps a strategy in turning a spotlight on the new guys, betting that they won’t be able to handle the pressure? who knows, but it will be one to watch. I give them 2 months :-)

Ted Murphy, the CEO of PayPerPost, is a genius. Not because of what his company is doing, PayPerPost and paid posting isn’t my thing, but I find him a genius with my marketing hat on, because in years to come Ted Murphy and his marketing strategy for PayPerPost will be taught to kiddies at University in their ECommerce and Social Networking text books. It’s that good. Really.

Let take a run down of the PayPerPost (PPP) marketing strategy.

1. Launch a product without the one thing everyone said you should do: disclosure.

There are a number of competitors out there to PayPerPost, can anyone name more than maybe one? I can’t. PPP cut through because they intentionally left out forcing their “posties” to disclose the financial arrangement. Net result was a complete bushfire of outrage and indignation. Not even PPP itself could pay for that sort of attention and link love.

Remember that there is NO such thing as bad publicity. All those indignified soles were NEVER going to sign up in the first place. However, not all of their readers would have shared these views, and the company received exposure to millions of people.

2. Get in peoples faces

Industry events, even industry Top 100 lists, just to provoke the haters to slam you some more. If Web 2.0 is all about Attention, then PPP has mastered the art. I can’t remember a week in the past 3 months where I haven’t read someone carrying on about the company. It’s literally a red rag to a bull play, PPP wants attention, it helps drive new “posties” and advertisers to the company. Most people are grown up enough to make up their own minds…but they need to know you exist, what better way than to whip up the haters.

Robert Scoble and PodTech have decided to turn down payment for Scoble speaking at the “Postiecon”, but he’s still speaking at it (and the time of writing). Whether he is for them or against them makes no difference, his credibility is being leant to the conference by his appearance. Just word of his appearance has whipped up a whole pile of PPP discussion in the blogosphere (me included). Lots of mentions, lots of attention….lots more visits to their main page, potentially lots more signups and advertisers…you get the idea.

Have you checked out the PPP’s fly on the wall style documentary (or should that be mokumentary) Rockstartup? I watched an episode and I really wanted to reach through the screen and punch half the people in it. Jeff Jarvis covered it at Buzzmachine last week. Yes, it’s awful, yes it makes them all look like grade A w*nkers, but as a promotional tool to get more attention? it totally rocks (pardon the pun). More attention = more visitors = more posties + advertisers.

The above 4 sound simple, but having a think skin is the magical ingredient that makes PPP’s marketing strategy work. It’s not nice being slammed in any shape or form, and yet if you can hold it together, take the blows, and the end of the day you laugh all the way to the bank…just as PPP is now undoubtedly doing.