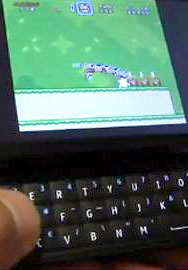 Oh Nokia, how far you’ve fallen from your once-lofty mobile gaming ambitions. The Nokia Mosh repository carried so many wild and wacky games — until you threw away your entire developer community in favor of your clean and shiny Ovi app store. Now you can barely give away top-tier titles for free. N-Gage held so much promise as a mobile online gaming service, boasting such big titles as Tomb Raider and The Sims and Metal Gear Solid — until you unceremoniously killed the whole thing.

Now, to demonstrate the gaming capabilities of your new N900 smartphone, you’ve resorted to running classic games on retro console emulators. Never mind the sheer absurdity of using software emulation to sell the native capabilities of a piece of hardware. Sure, emulators are legal, and hardcore mobile gaming aficionados love emulators, but the game ROMs in your promo video are of questionable legality.

Entertainment industry execs, take note: this is how an old classic can successfully make the transition into new media. When The Muppet Show was cancelled in 1981, a lot of us felt like we lost our old gang of childhood friends. Fortunately, the Muppets just launched their own YouTube channel, and they’re hitting the medium of online video with the force of Gonzo shooting out of a cannon.

Kermit and crew clearly did their homework. With punchy new original content perfectly tailored to the viral, shortform, fourth-wall-breaking nature of online video, the Muppets know exactly what they’re doing on YouTube — despite Statler’s and Waldorf’s constant assertions to the contrary. Apparently, old frogs can learn new tricks.

If you thought the Windows 7 house party ad was lame, wait ’til you see this. On November 8, Microsoft was planning to sponsor a special episode of Seth McFarlane’s animated comedy series Family Guy to promote their latest operating system.

You can see where this was going: Family Guy’s humor is very edgy, while Microsoft’s marketing is very corporate. Combining the two would have resulted in a horrifying trainwreck of pure sellout stupidity.

Fortunately, Microsoft pulled out of the deal after executives from Redmond saw an actual taping of the show. Apparently, up until that point, they were blissfully unaware of Family Guy’s edgy humor. Talk about being out of touch.

Now Microsoft has released clips from that hideous abortion through the Windows YouTube channel. As you can see from these clips, Microsoft made the right decision by killing their collaboration with McFarlane. One of the video descriptions even acknowledges the blatant selling-out involved: “When Brian notices Stewie has a new PC, he thinks he smells a sellout.”

Call your neurologist, because the sheer inanity of these totally unfunny sketches will kill your brain. END_OF_DOCUMENT_TOKEN_TO_BE_REPLACED