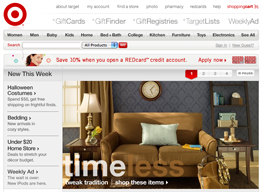 A federal district court judge issued two landmark decisions today in a nationwide class action against Target Corporation. First, the court certified the case as a class action on behalf of blind Internet users throughout the country under the Americans With Disabilities Act (ADA). Second, the court held that web sites such as Target.com are required by California law to be accessible.

The ruling was issued in a case brought by the National Federation of the Blind (NFB). The suit charges that Target failed and refused to make Target.com accessible to the blind and, therefore, violated the ADA as well as two California civil rights statutes: the California Unruh Civil Rights Act and the California Disabled Persons Act.

â€œWith the latest release of AIM, we continue to provide our users with the tools that make it easy for them to connect and share their lives with their social circles in real-time wherever they may be,â€ said Marcien Jenckes, Senior Vice President and General Manager, Messaging and Social Media, AOL. â€œAs social media booms, weâ€™re introducing even more ways to help our users connect. AIM users can now send a text message to one friend or broadcast a personal message to all of their friends right from the AIM Buddy List.â€

Later this month, AIM users will be able to express themselves through AIM Profiles, a new social networking feature. Here, theyâ€™ll be able to share their personalities and life details, as well as thoughts entered into their Buddy Info pages. Users will also be able to engage in a new photo sharing experience called AIM Photos, which enables users to tag buddies and make comments on photos.

Also coming in October is a new personalized start page called AIM Dashboard. Here users will be able to check out recent updates from their entire buddy networks at a glance, as well as update their profiles and status messages, even set up RSS feeds for popular services such as Flickr, YouTube and Digg accounts to broadcast to their buddy networks.