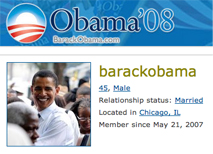 Eons, the 50-plus media company, today announced that presidential candidate Barack Obama has launched a presence on Eons.com’s social networking platform as part of a dialog with boomers, the most engaged and passionate Americans in our nation’s history, about the most important issues facing our nation.

Barack Obama’s presence on Eons.com is expected to leverage the power of social networks and user-generated content to connect with 50-plus Americans in a way that embraces the newest and potentially most influential political medium on the planet, the Internet. With the largest community of politically vocal and mobilized boomers on the Web, Eons is an ideal domain to host a discussion between Barack Obama and boomer voters.