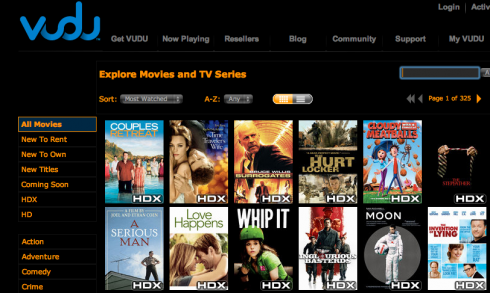 Wal-Mart has been in the DVD retailing business for quite some time now. And while this has been doing good for them, the company lacks one service which has been the the more popular way of bringing digitial movies to U.S. consumers – video-on-demand service.

But Wal-Mart may be preparing up to enter this arena soon, as New York Times is reporting that the video company is eyeing Vudu, an online movie service provider. Although the deal has not been confirmed yet by both companies,reports had it they have began informing Hollywood studios about the deal.

If the deal is indeed true, Wal-Mart maybe facing up stiff challenge against the likes of iTunes, Netflix and other online video-on-demand services. While Vudu for its part has been pretty much making some noise especially during the recent CES Event wherein the company managed to struck some deals with LCD TV manufacturers in putting Vudu services in their products.

Previously, Vudu has been advocating the use of a separate device that would connect to home TVs but could not manage to get some leverage. Since then, the company concentrated on delivering online movie service instead.

We’ll see whether this deal would make some headway in the coming days. It will be exciting to watch how Wal-Mart would put up a challenge against iTunes, Amazon, and other big names in the video-on-demand service. And whether which one will emerge as the households’ choice of VOD provider.

Remember when LiveJournal was sold to some Russian company nobody’s ever heard of? The once-great blogging pioneer, which was among the first services of its kind to boast such cool features as comment threading and social networking, eventually failed to evolve and fell to the wayside. Now LiveJournal is nothing more than a mass online group therapy session for wrist-slashing emos.

History repeats itself with another pioneer that failed to adapt. If you’ve been into social networking for a while, then you would remember the Great Friending of 2003. That’s the year when Friendster introduced the concept of the online social networking service, when we all rushed to map out our social graphs online for the first time. Heck, Friendster even owns a patent for social relationships, a dubious patent to say the least.

Sadly, Friendster failed to capitalize on its initial success. Instead, like the proverbial hare in a race with the tortoise, the early starter rested on its laurels and failed to follow through on two very important things:

1) Scalablity. Friendster’s scalability problems started with cache replication errors here and there. Then they got worse. Dozens of friends would disappear at a time. Updates would fail to show up, a no-no in the realtime Web. Eventually, it got so bad that the whole site went down for four days without explanation last year. Friendster’s failure to scale gave MySpace the opportunity to rocket ahead in the social networking space.

2) Interoperability. Facebook introduced its application platform. MySpace introduced MySpaceID. Twitter’s rich APIs spawned hundreds of mashups. While all that was happening, Friendster remained… Friendster, the same old social information silo it always was. That’s how Facebook became the world’s top social network, with 350 million users using Facebook Connect 60 million times a month across the Web. That’s why over six thousand sites across the Internet — from huge sites like The New York Times to tiny sites like my own personal blog — now support Facebook Connect, and not Friendster Connect.

Friendster’s spin doctors would have you believe the site still rules Southeast Asia. That’s a lie. It’s the same kind of lie Carol Bartz tells about Yahoo: commercial strength among the unwashed and disengaged masses. I’m currently typing this post from the tropical paradise of the Philippines, surrounded by all its beautiful women — the most beautiful of whom are on Facebook and MySpace and Twitter. Around here, Friendster is considered the online hangout of the lower class. Think about the kind of people you see on MySpace, scaled down to the third world. You’ll get the picture. That’s why your next social network ad campaign to target Southeast Asia will probably be on Facebook, and not on Friendster.

I actually dread the thought of Friendster rolling out a federated identity service, something like Facebook Connect or MySpaceID or Twitter OAuth. Friendster is filled with moronic teenagers who type in mIzSpElT cAmElCaSe. God forbid Friendster Connect spread them across teh Intarwebz.

Even after all these years, Friendster still hasn’t figured out that it needs interoperability, that social information silos just won’t cut it in the age of the mashup, that it takes more than just fancy layouts and teenybopper marketingspeak to succeed in an interoperable medium like the Web. From its cutesy unreadable logo with vague cloud computing allusions to its Twitter-wannabe front page, Friendster’s new interface looks like a parody of Web 2.0 design motifs.

The most recent ad for Friendster even flies in the face of Metcalfe’s Law, actually mocking Facebook’s popularity and trumpeting Friendster’s status as a hopelessly insular, disconnected, geographically isolated information silo. Apparently, Friendster is only for Asian teenagers with no concept of data portability or people outside their little cliques — and they’d like it to stay that way, thank you very much. White/black/Hispanic people who’ve been spoiled on the power and reach of the Facebook platform aren’t welcome at Friendster’s little kiddie clubhouse.

For all these reasons and more, Friendster has met a fate similar to that of LiveJournal years before: sold off to some Malaysian company nobody’s ever heard of, all for the piddling sum of $110 million. Oh yeah, Facebook founder Mark Zuckerberg is just quivering in his boots. After all, Facebook is only worth $15 billion.

Let the sad fate of Friendster serve as a lesson to founder Jonathan Abrams, and all pioneers who whine about their supposed entitlements while smart competitors leave them in the dust. Nobody cares if you were the first to do social networking, or blogging, or sliced bread, or fire, or the frickin’ wheel. Seniority does not equal relevance. Evolve or perish.

Looking for possible future acquisitions? Here’s a list of 5 companies that would be a great fit for a traditional media empire looking to grow its business by embracing a new media company that is on a growth path.

Here at 901am, we’ve take the time to evaluate these 5 companies and their possible homes if they were acquired. These are mere speculations, and opinions. Any conflicts of interest are merely by accident. We hold no vested interest in any of these companies.

1. Breaking News Online
Paid Content recently highlighted Breaking News Online. I personally agree with Rafat Ali’s notion about this small company. It would be a great pickup for any news organization. However if I was the CEO of NPR. I would dig deep and find the money to buy this startup. Likewise a mid size city would be wise to pick up this news startup.

2. Celebrity Gossip Rags
The Superficial, Jossip, PopCrunch all come to mind as great ideas on which to build on. Numerous small and large companies should be reaching for the phone to try and pick up one or all of these celebrity gossip sites. Some prime examples of where a gossip rag would be fit would be Huffington Post which could use one of these sites as a strong base to create an entertainment division. Another company that would be wise to pick up one of these up and coming celebrity sites is

3. AllTop Aggregator
The Alltop Aggregator is just awesome enough to warrant a takeover. It would make a nice solid starting point for any established news entity looking to embrace new media. Some likely landing points for this company would be a traditional news agency like a mid sized newspaper looking to gain new readers, and reach out to those used to consuming news through new media.

4. b5Media
B5Media, is an online media publishing company located in Toronto. A great landing spot for this company would be an advertising agency looking to increase profits by owning their own sites. The AOL ad networks come to mind who could use a few of these sites to bolster their own brands. B5Media has some strong brands including ProBlogger, & Digital Photography School two very strong brands that would be very valuable to a company who knows how to monetize this type of content well.

5. Bleacher Report
The Bleacher Report is a quiet yet AMAZING success seeing growth that is unheard of in such a short period of time. It’s ripe for a takeover. It’s partnered with CBS Interactive and I think that’s a likely landing spot for this company, unless Yahoo Sports picks it up which to me seems like a great fit even though Yahoo said it’s shedding companies that don’t fit it’s new strategy. The Bleacher Report fits its’ strategy well and I think would be in goods hands at Yahoo.

In an era where takeovers, and acquisitions are a daily occurrence in the media publishing industry this one comes as no surprise to me, however the buyer is a bit of a surprise to industry insiders.

Terms of the offer will not be disclosed by Bloomberg and BusinessWeek parent McGraw-Hill Cos. But knowledgeable sources say that Bloombergâ€™s cash offer is in the $2 million to $5 million range and that it has agreed to assume liabilities, including potential severance payments. It remains to be seen how much of the magazineâ€™s 400-plus staff Bloomberg plans to cut, but reports of a planned scorched earth campaign are overblown, say sources.

Nokia has announced another acquisition in its push to deploy useful mobile services for its cellphone users.

Dopplr is a service that allows travellers to share their personal and business travel plans privately with selected networks, as well as gleaning information about good places to stay, eat and explore in various worldwide cities.

Though the press announcement is shortened to-the-point, this is no doubt a useful service that could tie in well with other services such as Maps, Plazes and Navteq.

Nokia insists that the current experience for Dopplr users won’t change. I expect there’ll be some interesting ongoing development to get Dopplr functionality into Nokia phone software. It could see the expansion of the seven-strong London/Helsinki-based company.