Washingtonpost.Newsweek Interactive and Google announced that they have extended their agreement to deliver contextually targeted ads and Google Web Search functionality to washingtonpost.comâ€™s web pages.

Readers will benefit from fast, accurate web results through Google search and see relevant Google ads throughout washingtonpost.comâ€™s web pages when they perform a Google search directly from the site. Washingtonpost.com will continue to benefit from access to Googleâ€™s extensive network of advertisers. Additional details of the agreement are not being disclosed.

In anticipation of second-quarter 2007 earnings calls from Google and Yahoo! this week, eMarketer has released new online ad spending estimates for the two companies relative to the overall US market. 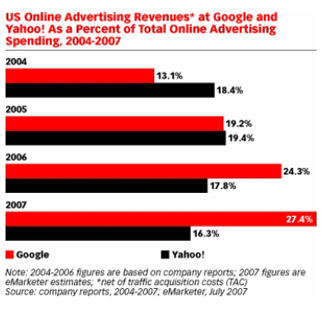 Although net US revenue growth rates at both Google and Yahoo! have declined since 2004, eMarketer projects Google’s ad revenues to rise by 45% in 2007. Yahoo!, on the other hand, has struggled to keep up, with growth falling to 18%, even as the total US Internet advertising market expands almost 29% this year.

The loss in traction at Yahoo! has come from competition in paid search and the delay of its Panama search platform, while display revenues have remained solid. However, with up-and-coming players MySpace and Facebook becoming strong competitors in their own right, Yahoo!’s challenges are mounting.

“At this point, the key question for Yahoo! is whether to chase the evermore elusive paid search advertising dollar or to shift its focus even further onto video and display ads for brand marketers,” said David Hallerman, senior analyst at eMarketer. “At the same time, Google’s spectacular revenue growth remains unbalanced by its reliance on text-link ads. Getting greater acceptance among its advertisers for video and display ads on its network will be one of Google’s greatest challenges this year.”

Personal Life Media, publisher of lifestyle content in the form of 16 weekly audio programs, podcasts and blogs for people on the leading edge of culture, introduces DishyMix: Juicy Interviews with Famous Internet and Media People, hosted by Susan Bratton who dishes with the influencers of the Internet and media world. As part of the move to Personal Life Media, DishyMix also receives sponsorship from Isobar US, the world’s largest dgital marketing network servicing clients in 40 countries worldwide and Blue Lithium, a leading data-driven direct marketing company.

“On DishyMix, I dialog with the most multifarious personalities in the business to give listeners an insight into what drives these VIPs from a personal perspecive,” Susan Bratton, CEO of Personal Life Media and DishMix Host, said. “My first podcast, launched on Webmasterradio.fm in 2005, germinated my enthusiasm for this medium. The intimacy of podcasting lends itself to revealing the unique qualities that personify these superstars in our industry and after launching my own podcast network, it was natural move to bring the show over to Personal Life Media.” END_OF_DOCUMENT_TOKEN_TO_BE_REPLACED

Podbridge, Inc., provider of analytics and ad insertion services for downloadable video and audio content, today announced that it has partnered with Personal Life Media, Inc. to provide audience measurement and ad insertion services for its portfolio of weekly personal growth shows. Podbridgeâ€™s sophisticated ad insertion technology delivers the unique ability to insert ads seamlessly in the middle of video or audio content, also known as a mid-roll position, in addition to the standard industry offerings of pre- and post-roll. These ads are dynamically inserted so they can be easily changed based on campaign parameters. Publishers determine ad insertion locations, can vary ad lengths and bundle multiple ads together to offer integrated ad packages that are most valuable to marketers. In addition, the feature of fadeâ€“ins and fade-outs of ads within the show content enable a smoother, more professional consumer experience.

“Podbridge deftly supports dynamically-served â€˜Surround Sessionsâ€™ that include combinations of pre-, mid- and post-roll ads for shows downloaded from my site, within iTunes and across our syndicated podcast network,” Susan Bratton, founder and CEO, Personal Life Media said. “To attract advertisers, downloadable content providers must have the ability to create these kinds of innovative and professional advertising packages.”

adap.tv, an online video advertising platform that allows publishers and advertisers to match relevant advertising with online video content, announced that it has closed a Series A funding round of $10 million from new investor Redpoint Ventures and existing investor Gemini Israel Funds, to enhance and expand the company’s product offerings, broaden recruitment efforts, and grow operations.

adap.tv’s advertising platform unlocks the value of the entire video by offering viewer-friendly advertising and message placement functionality that extends beyond pre- and post-roll advertising spots. Utilizing sophisticated algorithms that not only analyze video content and determine the most relevant ad, the company’s technology adapts in real time to viewer behavior, thereby increasing the success rates for publishers and advertisers alike.

“Securing funding from two of the finest investment firms validates the potential of our business,” said adap.tv CEO Amir Ashkenazi, formerly the co-founder and CTO of Shopping.com. “The validation and support we have received from the investment community is critical to building out adap.tv’s business and securing our leadership role in the online video advertising market.”