Not content with thrashing Apple in the mobileverse, there are now rumors that Google is preparing to launch Gingerbread next week.

According to the source, we wonâ€™t have to wonder what exactly Gingerbread, the next Android OS, is going to bring to the table for too long because the Gingerbread SDK is going to go public next week. […]

Getting access to the latest revision of the Android SDK means we’ll find out all the new API calls showing new OS functionality and, more importantly, will have access to the latest emulator showing exactly what the stock Android Gbread will look like. (Android Police)

While Froyo (aka Android 2.2) helped make flash a reality for mobile devices, Gingerbread could help Android compete against the iPad without “super sizing” the overall layout.

Gingerbread’s appearance could alsoÂ coincideÂ with the launch of the rumored DroidPad, which will probably be Motorola’s answer to Apple’s iPad (the latter which has become the media darling as of late).

Although we still have to place Gingerbread’s launch in the “take with heavy doses of salt” category (translation: we’ll believe it when we see it), Gingerbread’s appearance could be Google’s backup plan just in case the Chrome tablet fails.

It’s official! Today Windows 7 Phone has made its debut with Steve Baller appearing on the Today’s Show expressing giddyness about the device (despite skepticism from NBC).

Unfortunately for Microsoft, the smartphone space is a little crowed with Apple and Google dominating the space (mind share wise at least), not to mention RIM’s Blackberry Torch (which one of my friends chose instead of an iPhone–go figure).

Despite being an iPhone geek, I do like what Microsoft has done with their latest and greatest smartphone, and while I have yet to leave Steve Jobs flock, here are 4 reasons why you should choose Windows 7 phone over the competition. END_OF_DOCUMENT_TOKEN_TO_BE_REPLACED

Android fans outside of Verizon’s network no longer have to envy their iPhone and Nokia buddies as Skype is officially available for those who embrace the green robot.

Youâ€™ve been asking us for it â€“ and now itâ€™s here. Skype is now available on a wide range of Android phones, so you can save money and stay in touch when youâ€™re out and about. VisitÂ skype.com/m on your phone to download, or read on to find out whatâ€™s inside.

With the new app, you can make free Skype-to-Skype calls, and send and receive IMs for free, one-to-one or with a group. You can also call phones atÂ Skypeâ€™s great rates â€“ over WiFi or 3G. (Official Skype Blog)

Truthfully it was always puzzling as to why Skype decided to make their app exclusive to Verizon despite the fact that doing so limited their service to between 1/2 and 1/3 of US customers despite Androids global footprint.

Fortunately it seems as if Skype execs have seen the light, as Skype is available on all Android powered devices unless one lives in Japan or China.

Unfortunately if you have a Samsung Galaxy S you are more or less out of luck, but hopefully Skype will be able to rectify this soon (as users are reportedly unable to sing into their Skype accounts.). 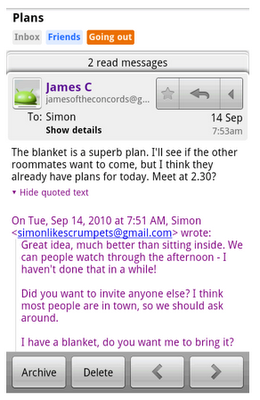 It looks like Google is once again ignoring the iPhone by blessing its favorite Android child first.

After releasing priority inbox to the Gmail faithful, it looks like my Droid lovin’ friends will now receive this feature thanks in part to an official Gmail app.

As you scroll through a conversation, your most important message actions will now stick to the top of the screen, one click away, no matter how long the email is. […]

Even though iPhone lovers have a similar feature (if you consider the “Important” folder a feature), truth be told Google will undoubtedly improve upon their Gmail app, unlike Apple (who will only update it app when it deems necessary).

Thus far the Gmail app is only available to Android phones boasting Froyo (aka Android 2.2) and is being sold by Google at the affordable price of free. 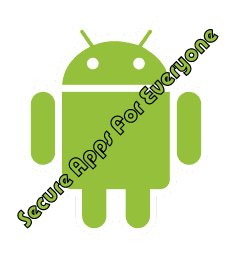 Whether you love them or hate them, you have to admit that Google has done an impressive job cultivating a free market Android app system that is second only to Cupertino’s curated iOS app store.

Unfortunately for Google’s beloved Android , fake, illegal or unethical Android apps are appearing in greater frequency, a trend that will only increase when (not if) Android surpasses Apple in the number of available apps.

After the wall paper scare, Google can not afford to risk the reputation of its mobile OS, especially with the media already shooting down the search engine giant every time something evil happens.

In order to ease the fears of users downloading apps, Google may want to establish a review team to verify Android apps that are safe to use for the end consumer. END_OF_DOCUMENT_TOKEN_TO_BE_REPLACED