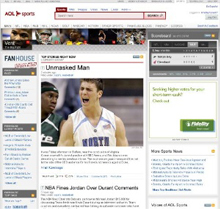 AOL today launched a new version of its sports site that focuses on community content and blogs, and leverages the power of its top sports blog the FanHouse. The overhauled sports and news sites build on the success of the blog-centric format first used by celebrity gossip site TMZ.com, a joint venture of AOL and Telepictures Productions.

The new AOL Sports blog format invites discussion and debate about top sports stories. Posts are tagged by topic and team so fans can easily find news on their favorite team or rivals. The site also incorporates the FanHouse on the main sports page, giving users the power to engage in a real-time dialogue with other sports fans. 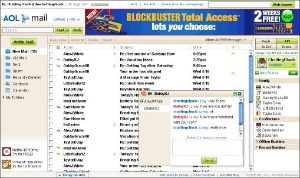 The new AOL Mail beta is part of a series of improvements designed to make the service more accessible, convenient and even easier to use. AOL also announced that, in addition to IMAP support, it now also offers POP3 access, which lets users access their AOL Mail using any Internet mail client program. AOL is now the only major provider to offer free POP3 and IMAP access to email. AOL Mail also includes unlimited e-mail storage, which the service has offered since 2005, and is now extending to its aim.com and “My eAddress” users.

The new AIM WIMZI widget communicates with the widget ownerâ€™s AIM client and is directly integrated with the ownerâ€™s AIM Buddy List feature, enabling site, blog and social networking profile visitors to initiate an IM conversation when the owner is signed on to AIM. A widget ownerâ€™s online presence status is indicated with a highlighted icon and screen names and identities are protected through customized owner and visitor aliases. 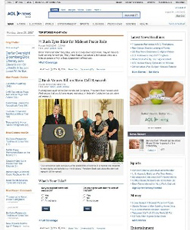 The new AOL News sites combines traditional news, with AOL programming, user generated news, and social news tools to create a comprehensive source of news and information. This new, interactive experience engages news consumers in a real-time dialogue about the latest news and debate of the day.

“News habits have changed, and AOL News is the first site designed from the ground up to appeal to todayâ€™s online news consumer,” said Lewis Dâ€™Vorkin, SVP of AOL News & Sports. “Unlike other news portal sites, AOL News leverages the increasingly popular blog format, drawing on a wide rage of news sources to provide consumers quick access to the top stories and related pictures, videos, polls. We believe that AOL News will set the standard for other major online news sites.” 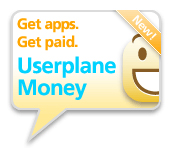 Userplane, the application platform for online communities and a wholly owned subsidiary of AOL, announced that its new revenue-sharing platform, Userplane Money, is now available to anyone developing applications for Facebook. The move enables developers to earn money with the widgets they make available to users of the wildly popular social networking site. Userplane offers customizable communication tools, such as live IM and chat, that can be added to any site for free, simply by cutting and pasting a few lines of HTML code. Userplane serves unobtrusive ads in its players, and splits the proceeds with participating publishers.

Userplane Money is a revenue-sharing program that helps websites of any size make money. Any publisher that embeds Userplane tools is eligible to receive a share of ad revenues. So far, thousands of sites have joined Userplane Money, including many of Userplaneâ€™s top publishers. In addition, Userplane is now directly supporting advertising within other Facebook applications.

Truveo announced that its video search engine has reached an audience of almost 40 million monthly unique visitors. Since October of 2006, it has also seen a 50% month-over-month increase in usage across all of the websites powered by Truveo.

â€œUsers are realizing that their favorite video may no longer be available on video sharing sites due to copyright issues, but they can still easily find legal versions of those videos elsewhere on the Web through a video search engine like Truveo,â€ said Timothy Tuttle, CEO and Co-Founder of Truveo and Senior Vice President of AOL Video.

In addition, Truveoâ„¢, which already powers some of the most popular video sites on the Web, extended its reach with a number of significant new partners who are using the companyâ€™s video search engine to power video search on their websites and applications. These new partners include: Brightcove, Clevver, CSTV, Flock, Pageflakes, PureVideo, Qwest, Search.com, Sportingo, Netvibes, Widgetbox and YourMinis. These new partners join AOL Video, AOL Search, Excite, Infospace, Microsoft Corporation and hundreds of others who are already using Truveo.