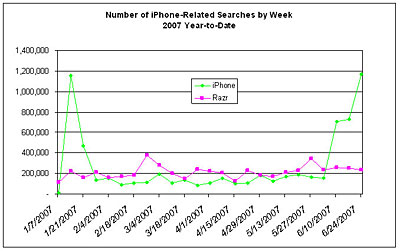 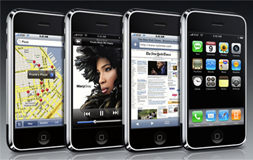 “Apple retail stores were created for this moment â€“ to let customers touch and experience a revolutionary new product,” said Ron Johnson, Apple’s senior vice president of Retail. “With our legendary Genius Bar support, free workshops and our One to One personal training, we’re here to help customers get the most from their new iPhone.”

iPhone introduces an entirely new user interface based on a revolutionary multi-touch display and pioneering new software that allows users to control iPhone with just a tap, flick or pinch of their fingers. iPhone combines three products into one small and lightweight handheld device-a revolutionary mobile phone, a widescreen iPod, and the Internet in your pocket with best-ever applications on a mobile phone for email, web browsing and maps. iPhone ushers in an era of software power and sophistication never before seen in a mobile device, which completely redefines what users can do on their mobile phones.

With today’s launch of the Apple iPhone, scammers and thieves are coming out of the woodwork. ScamBusters.org, a public service website that has helped over 9 million people protect themselves from Internet scams since 1994, offers predictions about the Top 7 online and offline iPhone scams, as well as tips to avoid getting ripped off.

As we await Apple’s iPhone, we are pleased to post this contribution from Donald Whitetail (deer) of Animal Internet. 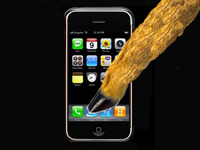 Animals have a hard time using high-end mobile phones. I know because Iâ€™m a deer, and Iâ€™ve owned them all: the Sony Ericsson W810i, the Motorola Q, Samsungâ€™s BlackJack… All nice to look at yet totally unusable by those of us without fingers. Thatâ€™s why Iâ€™m excited about the new iPhone. By replacing the copious buttons found on other cell phones with a large touch screen, Apple has created a device that can be operated by the entire land-dwelling animal kingdom.

“But animals canâ€™t talk,” I hear you humans saying. Why would you creatures ever want a cell phone? The answer? Text messaging. Being able to send messages over long distances quickly will allow us to do many of the things were already do but better. Hunt and protect ourselves for starters. We animals have wanted to text message for ions but, until now, using a phone required either pushing tiny buttons or negotiating a stylus. Ever try holding a stylus with a hoof? Thanks to Apple, animals will no longer be locked out from using this paradigm shifting technology.

The iPhone has almost everything a deer would require. The most impressive details being good battery life (there are few electrical outlets in the forest) and a fast data connection. True, the phone uses EDGE which is not a full 3G network, but that should be fast enough for now since most animals donâ€™t yet deal with large graphic files. For those times where a bigger data pipe IS required, the iPhone can switch over to a WiFi network. With Starbuckâ€™s recent announcement that theyâ€™re running out of street corners and will soon start opening outlets in the middle of deserts and forests, a T-Mobile Hotspot should soon be accessible in every square foot of the wilderness. Itâ€™s amazing how things fall into place, isnâ€™t it?

One feature I am personally looking forward to is iPhone’s access to YouTube videos. Until now, my television viewing has been via the store window of Ace Appliance which means Iâ€™m at the mercy of the guy who closes up for the evening. Whatever random channel he leaves the display TVs tuned to is it for the evening. Sometimes I get lucky and get to watch Animal Planet. Other times I’m stuck with the Fox News Channel. With the ability to stream YouTube videos direct to the iPhone, Iâ€™ll finally be in control of my nocturnal entertainment. (Goodbye Oâ€™Reilly Factor, Hello Andy Kindler and reruns of The Pet Shop. I also like the animal clips on Americaâ€™s Funniest Home Videos. The old ones with Bob Saget were the best. Whatever happened to him? I heard he started working blue.)

There seems to be only one thing missing from the iPhone – a camera. My uncle’s life was cut short a few years ago in an area clearly marked by No Hunting signs. A camera would have come in handy because without a photo of the crime scene it’s the hunterâ€™s word against ours. As far as an animal’s requirements, the lack of a camera is a glaring omission. The other negative is price. With the exception of animals working in the high-paying entertainment and hauling industries, most of us donâ€™t have $600 just laying around. It takes a long time to collect that much in dropped coins along the highway. But you canâ€™t fault Apple for charging what they can. Theyâ€™re in it to make a profilt, and to create paradigm shifting technologies doesnâ€™t come cheap.

First the Macintosh then the iPod and now the iPhone. Once again, Apple has managed to expand a market by creating a device â€œFor the rest of us.â€ 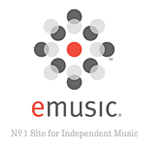 eMusic, the world’s largest retailer of independent music and the world’s second-largest digital music service after iTunes, announced that it is offering Apple CEO Steve Jobs a free lifetime subscription. The offer was made to thank Jobs for his support of the removal of digital rights management (DRM) software from online music. Because every track sold on eMusic comes without DRM, it’s the only significant legal music download service, other than iTunes, whose tracks will play on the iPhone. In honor of Apple’s release of the iPhone this week, eMusic is offering 35 free tracks to anyone who signs up for an eMusic trial at www.emusic.com/phone, including new iPhone owners who may be feeling a little light in the wallet after dropping a few hundred dollars on the hotly anticipated handset.

“We know Steve Jobs loves music, so for his new iPhone we thought he might want something a little different from the Top 40 fare that iTunes focuses on,” said David Pakman, eMusic President and CEO. “eMusic specializes in the best music beyond the commercial mainstream, from breaking indie rock acts like Arcade Fire and the National, to jazz greats like Charles Mingus and Miles Davis, to electronic breakouts like the new release from Matthew Dear. All Steve has to do is call me up from his iPhone and I’ll get him a free lifetime pass to all the great music he can handle. We hope that he and all other iPhone users will explore what eMusic has to offer.”

Editor’s note: The offer to Jobs is cute but he can afford any music that he wants. Why not just give it to someone else… maybe to Bill Gates if he will buy himself an iPhone. But wait, Gates is rich. Just raffle it off!