Twitter on Mobio will let others find out what users are thinking and doing in their own lives – via both text and images. Fans of Digg, a popular user-driven media and news websites, will let them view the most popular stories on the go using Digg on Mobio. With Kaboodle on Mobio, one can discover and recommend new things from fellow users with similar tastes and styles through the creation of customized shopping and wish lists.

Mobio has also released a free new widget designed to let users search for, organize and read their favorite blogs and news sites through a customizable mobile interface called My RSS. 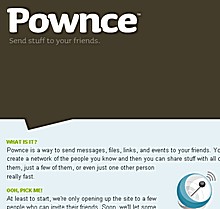 Pownce is a great way to send stuff to people you know. Add friends, then send them big files, invite them to upcoming events, share great links, and whip off a note to anyone, everyone, or just a few people.

At least to start, we’re keeping some control over registration so that we can scale the system under control. Scaling? It basically means that if a ton of people joined all at once at the beginning our site might slow down to a crawl. That would suck for everyone. So, as we get confident with the performance of the site, we’ll begin letting more and more people in.

As early as now, there are so many negative comments from readers of TechCrunch, citing it is no different from Facebook, Twitter, or from any regular email features.

I guess the big question is: Will Pownce reach the stardom enjoyed by Digg?

Compete, an online traffic metrics provider, reports that Digg and Facebook reach the 20 million unique visitors mark for the month of May.

Digg has managed to grow their volume of visitors to about 1400 percent in a span of a year, while Facebook’s site traffic has been steadily increasing since early May since new application development platforms were launched.

Compete’s Jay Meattle noted in the company blog that about four days after YouTube hit the 20M mark, Google made a move to acquire them for 1.65B worth of Google stock. “There is certainly something magical about reaching 20 million,” he added. This means that Digg and Facebook become prime acquisition targets in the web today.

Here are Digg and Facebook’s metrics for the month of May, compared with the top social networking site, MySpace, and the largest video sharing site in the web, YouTube.

Let’s see which company acquires what within the next few months.

Kevin Rose revealed what’s coming up at Digg in the next 6 to 12 months. Digg will be more personalized and will expand to areas like restaurant reviews, product reviews, and images.

SEOpedia is reporting that Digg is now banning users who Digg stories too many stories too quickly without actually viewing or reading the content. This is something that has long been advocated for by the community, particularly when the community sees spam reach the Digg homepage, before they can bury it.

Myself and others have noted that they are several legitimate reasons to not click a link and read or view the content of a Digg submission. However, the explanation given for this banning by Digg makes it appear as though the user was regularly digging stories at a volume and rate at which they were clearly either too lazy to read beyond the title and description, or that they were simply gaming the system and inappropriately inflating digg counts. The latter wouldn’t be very surprising given that I have witnessed my fair share of SEO circle jerk gaming on Digg, especially considering the banned user was part of this SEO’s discussion group.

Your account was banned for the rate of Digging activity youâ€™ve engaged in. Weâ€™ve determined that the time in which your Diggs happen, it isnâ€™t possible to actually read the stories. Please read each and every story before you Digg or bury a story. Once you agree that you will Digg/bury more responsibly and read the stories, we will unban your account.

Digg founder Kevin Rose took the opportunity to answer questions the community had after this news hit Digg.

This is extremely rare. We have automated systems that flag abnormal digging behavior (eg. hundreds of diggs in an hour). If the user is banned due to an alarm being set off – in all cases, they are given an opportunity to be re-instated. We strive to keep digg as bot free as possible.

When asked how to get an account reinstated, Kevin replied, “Just email us.”

This automated system appears to be intended catch bots that are used to game the system, but can likewise be used to catch diggers who do the same thing manually. Digg will continue to develop algorithms to detect and prevent diggers from misusing or abusing the system, as they become a greater target crossing the chasm into mainstream culture.