With Ultima Online: Kingdom Reborn, the legendary kingdom has been redrawn, reengineered and rebuilt for the next decade of players seeking an epic, fantasy MMO experience. The revamped new player content welcomes those who have never adventured through the celebrated lands of Ultima Online. Additionally, enhanced visuals and brand-new user interface present the game in a whole new light to veteran players.

â€œAs the tenth anniversary of Ultima Onlineâ€™s launch approaches, Kingdom Reborn introduces an entirely new experience while preserving the spirit of the classic MMO,â€ said Mark Jacobs, VP and General Manager of EA Mythic. â€œKingdom Reborn represents EAâ€™s ongoing commitment to MMOs and Ultima Onlineâ€™s dedicated and loyal community, some of whom have been playing the game since its launch almost ten years ago.â€

Electronic Arts Inc. unveiled plans for a new feature called Be A Pro: Online Team Play that will enable 10 people anywhere in the world to connect online to play a single match of FIFA Soccer 08. The new feature, available for the Xbox 360 video game and entertainment system and the Playstation 3 computer entertainment system, will be offered as a free downloadable feature six to eight weeks after the game ships to stores. FIFA Soccer 08 will be available in stores in Europe on September 28 and beginning October 9 in North America.

Be A Pro: Online Team Play is the evolution of a new play mode featured in FIFA Soccer 08 called Be A Pro that locks you into the role of a single, fixed player the entire game and challenges you to master the same disciplines as a real soccer player. Users receive real time feedback and analysis on the fly and a unique camera angle keeps both player and action in focus, zooming in when youâ€™re on attack. Now in Be A Pro: Online Team Play, up to five friends on different consoles will be able to select and take control of their own individual players on the same team, supported by AI teammates, to play against up to five rivals of another team. Alternatively, online users can select to play with free roaming players, and teams can have a combination of both.

â€œBe A Pro forces you to think and react like a professional player where you experience the whole range of emotions players go through during the course of a game,â€ said Andrew Wilson, Executive Producer of FIFA Soccer 08. â€œNow we are taking this experience online for you to share with your friends. You will have to learn to work together as a team much like any real teams go through in order to be successful.â€

King.com, the world’s largest skill games site, and digital entertainment services provider RealNetworks, announced that both companies have entered into an exclusive, multi-year partnership that will integrate gaming content across the companies’ gaming portals. As part of this worldwide syndication agreement, King.com will be the exclusive provider of skill games for Real’s global audience of more than 40 million monthly unique game players at RealArcade.com, GameHouse.com and Zylom.com. Real will also be the exclusive provider of online and downloadable casual games for King.com’s worldwide audience.

For the first time, Real’s game players will have direct access to King.com’s skill games on RealArcade. Skill-based games allow players to compete head-to-head with one another via the Internet for small stakes. King.com offers more than 60 skill-based games and is available in eight languages and seven currencies.

“Offering King.com’s skill games to our millions of users is a natural step to give our global audience more choice in online gaming entertainment,” said Charles S. Merrin, vice president of North American Games. “Additionally, securing increased distribution of RealArcade through King.com further increases our reach and the overall value of our publishing business for game developers.” 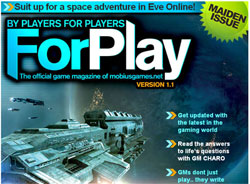 Mobiusgames.net launches ForPlay, an online gaming magazine made “by players for players”, the first version of which can be found here.

ForPlay (pun NOT intended, or so they say) is geared towards providing the latest about mobius games, including news, promotions, as well as what’s up in the gaming industry around the world, everything written by, as their tagline implies, online gamers themselves.

Owned by Manila-based Digital Media Exchange, Mobiusgames currently caters to gamers in the South East Asia region. “About 60% of the market is from the Philippines, and the remaining 40% from Singapore, Vietnam, and other SEA countries,” Eric Roceles, DME’s New Media Creatives & Research Manager, said.

The direction, of course, is to expand globally in the coming months. And with the launch of this gaming ezine, as well as the addition of new games in their roster, surely, the Mobius gaming portal is one to watch out for.

With over a million plays from around the world, “The Prison Life: Paris,” the Internet’s hottest celebrity satirical game, is getting its own sequel. Today, in honor of Paris Hilton’s re-release from the clink, GSN.com launches “The Prison Life 2: Full-Release.”

“Online games should be enjoyable, topical and timely, but most importantly they have to be addicting,” commented Roberts. “GSN has been successful because we strive to capture that winning combination in all of our games,” John P. Roberts, Senior Vice President of GSN, said.

“The Prison Life 2: Full release” and “The Prison Life: Paris” are part of GSN.com’s suite of mini-games that can be played online, easily sent through email, embedded in blogs and linked on websites. Previous original GSN mini- games include “Rosie vs. Trump,” “Kim Jong-Il: Missile Maniac,” and “Astronaut Moonstalker.”