Kriyari Inc. announced the launch of iStorez, a unique consumer shopping site that collects and organizes shopping newsletters from hundreds of stores and brands and presents them as â€˜on demandâ€™, visual and searchable storefronts. iStorez combines a â€˜patent pendingâ€™ storefront creation engine with Web 2.0 technologies to deliver continually fresh, relevant and unique content for shoppers. iStorez empowers consumers to enjoy a personalized shopping experience by allowing them to create a shopper profile and select their favorite stores. As consumers keep returning to the site, they will always find the latest products and discover the best deals at their favorite stores. To get started, iStorez comes with pre-selected shopper profiles so visitors can select a profile that matches their shopping style.

iStorez is very different from a shopping comparison or a social shopping site. First, consumers can browse the latest trends in fashion and technology as they view various storefronts. It is like walking down a â€˜virtual Fifth Avenueâ€™. Second, when a consumer searches for an item, the best matching storefronts are presented in order of relevance. It is as though a custom mall has been created â€˜on demandâ€™ based on the consumerâ€™s interest. This works very well for â€˜soft goodâ€™ items such as apparel, jewelry, gifts, furniture, etc., where a consumer has to see whatâ€™s there before
they can decide what to buy. Third, consumers can discover special sales, discounts and limited items that would otherwise be buried deep in their Inboxes, and that is only if they have previously subscribed to that particular newsletter.

QVC.com has expanded its popular online community into a full social network platform powered by LiveWorld. 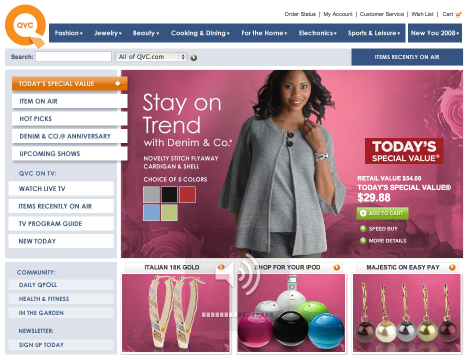 The PR firm of retail store Sears is having a really tough time these days defending its image against the tirades of consumers and privacy groups over its two separate online policies.

According to The Chicago Sun Times, privacy advocates are accusing Sears of adding spyware on the computers of some customers so it can track the online activities of those users for market research purposes. But Sears is quick to refute these allegations, saying that those consumers gave their consent and the terms were clearly explained to them. Moreover, the information gathered from customers is not shared to other parties.

Another major setback is reminiscent of Facebookâ€™s Beacon. Apparently, Sears has displayed publicly some confidential information in one of its website, ManageMyHome.com. Exposing data such as purchase history is like opening your door to muggers. A lawsuit is already filed by a customer for this very insensitive act.

Although Sears defended that this purchase history function is very helpful to the customers, it decided to temporarily shut down this service until a validation process is implemented.

Shopit.com, the social shopping community on the web, is spending $10,000.00 on two of the crappiest gifts received this holiday season.

Members simply add their crappy gifts to their Shopit stores in one of two categories; Ugliest Apparel Item, and Most Useless Item. The Shopit community will then vote on which item they think is the crappiest and the winner of each category will receive $5,000.

Contestants’ gifts will appear everywhere their Shopit store appears, including Shopitâ€™s Flash Store Widgets. Members can also have friends vote for their gifts through their Facebook profiles by adding the Shopit Facebook Application.

The portability of Shopit’s stores allows for maximum visibility of a store’s items, a useful feature for members competing for the most votes from their peers in the Crappy Gift Contest. Anyone is welcome to participate by adding a gift or voting. They simply join the free Shopit community and begin adding items, the crappier the better. Contest ends January 31.

When it comes to holiday shopping, forget Black Friday and Cyber Monday. Itâ€™s all about December 6.

According to the latest research of comScore, December 6 recorded $803 million in online sales, up 28 percent versus year ago. To date, this is the heaviest online spending day in the history.

Since November 1 until December 7, more than $18 billion has been spent online or equivalent to 18% growth compared to the same period last year.

â€œDecember got off to a strong start, as we saw spending growth accelerate to 20 percent for the week and the first ever $800 million online spending day on record,â€ said comScore Chairman Gian Fulgoni. â€œIt was a terrific kick-start to December, but we expect the upcoming week to be the heaviest online spending week of the holiday season as the procrastinators and late-season deal-seekers come out in earnest.â€

As expected, gaming consoles and accessories ruled the online shopping fever with Nintendo Wii reaching more than 30 million searches in the U.S. alone.

An interesting insight here is that there are more searches for PlayStation 2 compared to PlayStation 3, a sign of the bargain-hunting nature of many consumers.