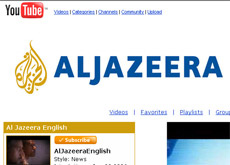 Al Jazeera English today announced the launch of its YouTube Channel. Content will include segments from its top shows such as Frost Over The World, Everywoman, and Inside Iraq.

“We believe that YouTube is a perfect platform to reach out to our audience and to give wide and easy access to new viewers around the world. We have significantly built on our distribution since launch and now reach well in access of 90 million cable and satellite households worldwide. With YouTube’s community of millions of online users this is set to dramatically increase,” said Nigel Parsons, Managing Director of Al Jazeera English

CBS Corporation announced the creation of the CBS Interactive Audience Network which will initially include new content deals with a host of online distributors including AOL, Microsoft, CNET Networks, Comcast, Joost, Bebo, Brightcove, Netvibes, Sling Media and Veoh. The agreements solidify CBSâ€™s position as the most widely distributed professional content provider on the Web.

Advertising revenue will be shared between CBS and its partners. All content will be available domestically with select clips and full-length sports programming distributed worldwide.

â€œToday marks an important step in our strategy to distribute content broadly across the online interactive landscape on an open, non-exclusive basis,â€ said Leslie Moonves, President and Chief Executive Officer, CBS Corporation. â€œEach of these partners offers value to our audience and our advertisers, who can now come to CBS not only for the most watched network on television, but for the most widely distributed professional content online.â€