In a recent comScore study on the Internet behavior in the Asia Pacific region, Yahoo emerges as the most visited site, beating Google and MSN sites.

Represented by 10 Asia Pacific countries which includes China, Hong Kong, India, Japan, Malaysia, New Zealand, Singapore, South Korea, Taiwan and Australia, the first comprehensive review of Asia-Pacific Internet Usage used panel-based measurement facilities comparisons across countries. The study reveals that in May, there were nearly 284 million people above 15 years of age who accessed the Internet. On the average, an individual in the Asia Pacific region logs in 13.8 days with about 20 hours viewing time in a month.

Apparently, Yahoo sites are the most popular in the region, ranking in the top three positions in 7 out of 10 countries included in the study, and emerging on top of Google and MSN. This can possibly be rooted to Yahoo’s initiative to localize their sites according to specific regional needs, something that rival Google and MSN has yet to focus on. 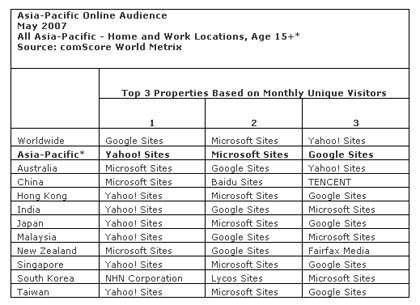 â€œWe all know that the Asia-Pacific region is large and that Internet usage is growing rapidly. What is fascinating about this study is that it allows us to compare Internet usage across countries using a consistent measurement methodology and to then determine where PC-based Internet engagement is most developed. We are looking forward to providing additional insight into the online dynamics of this important region in the future,â€ commented Bob Ivins, executive VP of comScore.

Visitors to Yahoo! Real Estate can search Apartments.com listings by geographic location on either a map or in list results, and narrow down search results based on price range, number of bedrooms and number of bathrooms. No registration is required to view complete details of Apartments.com rental listings, including photos, virtual tours, community descriptions, driving directions and ‘check availability’ features. Apartments.com offers a variety of contact methods including toll-free telephone number and email to learn more information about a rental.

Yahoo! SmartAds is powered by Yahoo!â€™s leading behavioral, demographic and geographic targeting capabilities and aim to connect users with what they are looking for based on their distinctive, expressed interests. For example, if a user is browsing for hybrid cars in Yahoo! Autos and has selected San Francisco as their default location in Yahoo! Weather, Yahoo!â€™s SmartAds platform can assemble and deliver a display ad in real time that showcases a hybrid vehicle from a major auto brand, as well as local dealer information and current lease rates. This provides a relevant experience to the user and allows the marketer to reach a user who is likely to become a customer. 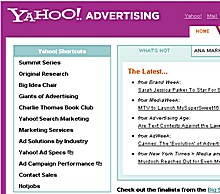 After appointing a new CEO and acquiring Rivals.com, global Internet company Yahoo! Will now combine its Search and Display advertising sales teams in the US, and has appointed David Karnstedt, currently senior vice president of Yahoo!’s Search sales business, to lead the unified organization as Head of North American Sales.

As a result of these changes, Yahoo!’s integrated sales organization will be the first of its kind to offer the widest selection of advertising products coupled with the broadest scale of search and display inventory to customers.

“By taking a more holistic approach to advertising sales, Yahoo! Will become a more consultative seller, which should make buying complete solutions easier for our customers across Yahoo! and our partner network,” said Karnstedt. “These moves will also enable our world class sales team to more effectively meet the needs of our advertisers – not just today but well into the future.”

Yahoo! is moving aggressively to build-on its long-term leadership position in display advertising, while further strengthening its strong position in search. 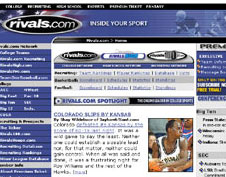 Yahoo is buying Rivals.com, an online network catering to fans of college and high school sports, a move that aims to place Yahoo at the helm of US sports market.

Since it was founded in 2001, Tennessee-based Rivals.com has built up an avid fan base of hardcore sports enthusiasts, operating on 105 college team sites and about 48 regional high school sites. To date, Rivals have more than 180,000 subscribers who regularly track local sports through the site.

“We are very serious about leading in the media space,” said Scott Moore, senior vice president for news and information at Yahoo. “This deal will help us connect with the college and high school sports fan.”

Besides bringing Yahoo a base of 2 million to 2.5 million fans of high school and college football and basketball, the deal is also one of the series of developments that analysts are expecting from Yahoo, following the management changes that happened this week.

The financial aspects of the deal was not disclosed but sources say that Yahoo brought it up to around $100M.