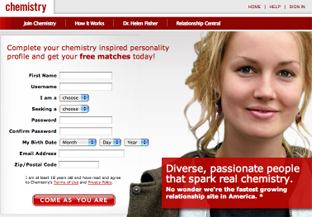 A national survey by Chemistry.com revealed that Americans are broad-minded when it comes to love. Chemistry.com commissioned the survey to continue to host the dialogue with single Americans and gain additional insight into current attitudes and behaviors around dating and relationships.

Here are some highlights of the survey:

â€¢ A large majority of Americans, 84%, agrees that there is nothing wrong with premarital sex between two consenting adults in a relationship