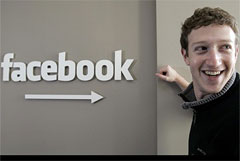 Facebook founder, Mark Zuckerberg, 23, will face the court on Wednesday to defend a lawsuit that was originally filed in 2004, accusing him that he stole the Facebook idea from three fellow Harvard classmates.

Twins Cameron and Tyler Winklevoss, and Divya Narendra, claimed to have been developing their own social networking site, ConnectU in 2003 when they decided to hire Zuckerberg to help them.

According to them, the accused deliberately slowed down the development of ConnectU while he developed a similar system which he eventually released three months ahead of ConnectU. Zuckerberg is said to have stolen their idea, source code, and business plan for Facebook. Needless to say, Facebook enjoyed greater attention and popularity than ConnectU.

The claimants are demanding for full control of Facebook and its assets, as well as damage fees. Zuckerberg, along with his two other co-founders, denies accusations and wants the issue over and done with.

Amidst these serious accusations are speculations that Facebook may be getting a Â£1 billion bid after Zuckerberg has turned down an offer worth Â£500 million. With the current lawsuits against the 23 year old owner of Facebook, a large sum of money, indeed, is at stake.