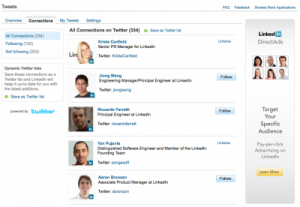 Sometime in November last year, LinkedIn started rolling out some Twitter integration features. If you’re one of those LinkedIn members who integrated your LinkedIn accounts with Twitter, you might also want to go deeper into these integration and install the Tweets app.

This new LinkedIn feature lets you easily find and keep track of your LinkedIn connections on both LinkedIn and Twitter. Once you’ve installed that Tweet app, you can access this from your Profile page by clicking on the “more” tab which you can find at the top of your LinkedIn profile page. Clicking on that “more” tab will display your Twitter public timeline including tweets from people you follow. From that page, you can post tweet to your account.

The new Tweet app also has a new module called – “connection to follow.” What this module does is to give you recommendations on new people to follow which are your LinkedIn contacts.

Another nice feature of the Tweet app is the “connections” category which list down your LinkedIn connections who have already installed the Tweet app. From there you can see their Twitter information, follow or unfollow them and see a sample of their last tweets.

Alright, enough of this blabber. If you’re into LinkedIn and Twitter, might as well integrate these two accounts. Â You may install the LinkedIn Tweet app from this link. 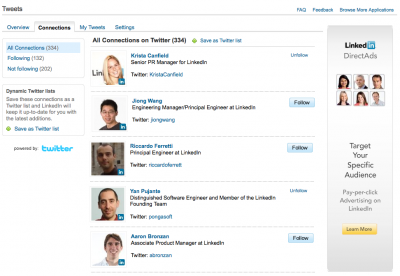