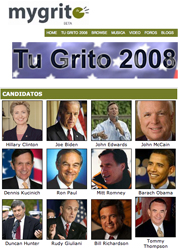 MyGrito.com, the first bilingual social network site targeting the Latino population, announced the launch of “Tu Grito 2008.” It’s where presidential candidates are offered an opportunity to create a profile for MyGrito.com members to familiarize themselves with each candidate. The Hispanic vote is becoming vital to the success of the race for presidency and with this fast growing site, Latino voters can find answers to their political questions.

Launched in January 2007, MyGrito.com has attracted members from across the country and Latin America. With its bilingual angle, it provides a site Latinos can call their own. With a steady monthly growth of 55%, this site has definitely found a niche within the bilingual community that was not previously being served.