Every song and album on Amazon MP3 is available exclusively in the MP3 format without digital rights management (DRM) software. This means that Amazon MP3 customers are free to enjoy their music downloads using any hardware device, including PCs, Macs, iPods, Zunes, Zens, iPhones, RAZRs, and BlackBerrys; organize their music using any music management application such as iTunes or Windows Media Player; and burn songs to CDs.

Most songs are priced from 89 cents to 99 cents, with more than 1 million of the 2 million songs priced at 89 cents. The top 100 best-selling songs are 89 cents, unless marked otherwise. Most albums are priced from $5.99 to $9.99. The top 100 best-selling albums are $8.99 or less, unless marked otherwise. Every song on Amazon MP3 is encoded at 256 kilobits per second, which gives customers high audio quality at a manageable file size.

The agreement reflects VeriSignâ€™s strategy to meet the changing needs of financial institutions by leveraging its global infrastructure for mobile messaging and content delivery. ClairMailâ€™s scalable platform and breakthrough technology combined with VeriSignâ€™s messaging and operations infrastructure will facilitate bringing this revolutionary solution to market rapidly, benefiting financial institutions of all sizes.

Incorporating ClairMailâ€™s platform and applications enables the VeriSign Mobile Banking Solution to support the â€œtriple playâ€ of mobile interface types: messaging (SMS and email), mobile web and native client applications. Support of these interface types enables financial institutions to offer reliable, secure and easy-to-use mobile services to their customers on a wide range of handsets. The joint solution securely and cost-effectively integrates with a financial institutionâ€™s systems of record and enables a broad set of 2-way services on one platform with a single implementation, including account management, fraud mitigation, actionable alerts, mobile payments, marketing campaigns and no-hold customer service.

As a place where brands, agencies and consumers can come together, users can search by age groups and content, look for advertising hot spots, see the relationships between sites, and plan social media campaigns.

“SMP demonstrates how social networks aren’t the new kid on the block, and in fact has been a part of our culture a lot longer than is thought. It highlights the relationships between organisations, business and people within the Landscape and how they intertwine and connect with each other using social media,” said Tim Gibbon, director of the UK-based media consultancy that created SMP, Elemental.

Whether you are an avid collector of action figures, coins, dolls, comic books and other strange stuff, there is a free online social network for collectors of all ages and passion, collectZing.com.

It allows members to connect with other collectors, and explore and share each others’ collections and collectibles. New collectors can learn from more experienced ones, join the community and make long-term friendships, and easily maintain a catalog of all their new purchases and finds. More obsessive collectors can benefit from the detailed object descriptions, which can be used to maintain financial and insurance information, track loans, trades and sale information. 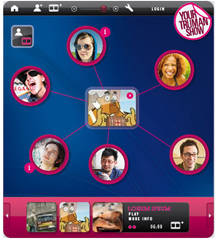 Your Truman Show, Inc. introduced the VideoMap Widget, which allows online video producers and fans to share content across popular social networks wherever it resides on the Internet, from inside the embeddable widget.

VideoMap can be placed and accessed by anyone on the Internet, in Facebook, YouTube, MySpace, YourTrumanShow or any other site. Its unique, key component is a graphical video relationship map, which, according to YourTrumanShowâ€™s Founder & Chairman Arturo Artom, â€œLets you see who links to you and who you link to as well as the video content you have both collected and may wish to share.â€

VideoMap lets users open the widget and see themselves in the center of the map, then they can opt from two views. In the first, they are the hub and can see their connections to friends across the web. In a tray below them, they see their own collection of clips from anywhere on the Internet. When the user clicks on a friend, that friendâ€™s collection appears in the tray. In the second view users are still in the center of the map. This time, however, they see the collections of their friends and the corresponding connections to those collections. When they select a clip that interests them, they then see its owner in the tray below.

VideoMap also allows users to search, share and collect videos by topic and by who has viewed a particular video. A sidebar appears which makes suggestions based on the relevant topics followed. This opens the door to one of the companyâ€™s monetization strategy. For example, if someone follows soccer videos, the special offers for soccer equipment, or tickets to a game will be served up.