Peformancing announced the release of a new pMetrics plugin for WordPress. The plugin is dubbed as a “major step forward in WordPress plugin technology.”

Here’s a rundown of what the new plugin offers:

Editor’s note: Performancing and 901am.com are both owned by Splashpress Media.

The Associated Press reports that Sony is possible headed to a head-on collision with Apple as it plans to create its own movie download service.

“Music and video downloading has been available through networks, and we are looking into the area as a possible business,” said Sony spokesman Shigenori Yoshida.

The Japanese company recently launched a new Walkman video player that comes with Microsoft Corp.’s Windows Media Player 11. It is capable of managing digital libraries in the U.S. and Europe. The LCD-mounted players, which will also be compatible with MPEG-4 encoded video and AVC, are already available in Japan. 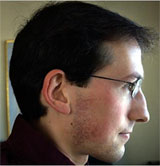 While Mark Zuckerberg is still facing charges made by three of his Harvard classmates who claim to be the original founders of the ever controversial Facebook, another claimant makes himself known.

Aaron Greenspan, 24, also a Harvard classmate, claims he’s the real founder of the billion dollar social network, presenting email messages, including ones that have Zuckerberg’s responses, to strengthen his claim.

NY Times reports that six months before Facebook and ConnectU were launched, Greenspan created an online service entitled houseSYSTEM which thousands of Harvard students used for school-related purposes. In Greenspan’s houseSYSTEM, “the Face Book” is a feature that allows users to locate other students within the network. Zuckerberg was one of the users. Four months later, Zuckerburg launches “thefacebook.com”

While Greenspan is not pressing financial charges, he wasn’t at peace with how things turned out. Hence, as a last word, he’s written a 306-page unpublished autobiography entitled “Authoritas: One Student’s Harvard Admissions” which documents the story behind his “search for justice”.

“This book is partly a search for justice,â€ he wrote in the introduction of Authoritas. â€œYou donâ€™t write an autobiography in your early 20s unless thereâ€™s something you need to get off your chest.â€

Zuckerberg was reported to be not available for an interview, saying he was not sure how to respond. 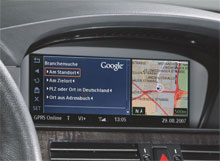 BMW is taking Google to the roads. A first of its kind, BMW now offers Google local search functionality in the car, allowing BMW car owners to search for local information on their dashboards, wherever they are. Or at least wherever in Germany they are.

This new BMW service allows car owners instant search for relevant on-the-road information such as names and addresses of hotels, banks, restaurants, and universities, among others — a development that bridges the gap between the automobile and the internet. Apparently, this is another step to the “ConnectDrive” initiative by BMW which “combines all individual online, assistance and service systems in the car”

While the service is only available in Germany, the idea is to expand it statewide. Also, what are the chances that the service becomes available across other car makes? Not far from happening.

The trial is a test of selected Yellow Book advertisers from across the country. The advertisers represent a cross-spectrum of small and medium-sized businesses that advertise on yellowbook.com.

The yellowbook.com video ads are professionally produced, high-quality spots that provide advertisers the opportunity to promote their business in their own words and with strong visuals.

“Video is a very compelling medium. An ad with sight, sound and motion is the next level in Internet local advertiser content. Consumers are remarkably drawn to it. Video ads will no doubt strengthen our advertisersâ€™ online campaigns by capturing the attention of users with an addictive medium,â€ said Pat Marshall, chief new media officer at Yellow Book.