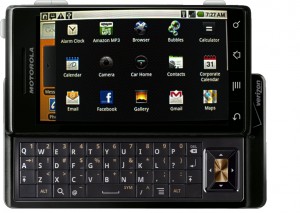 Motorola is intent on finishing the year strongly as it is gearing up another phone to add to its product offerings. New information has leaked about a new Motorola phone that will reportedly come out in a few weeks. The new phone, the Droid 5, might become available in time for the Christmas holidays, specifically by December 5.

The Droid 4 will be the fifth mobile phone that Motorola will be releasing just for this year. It has already released the Droid X2, Droid 3, Droid Bionic, and the new Droid RAZR, which was just released few weeks ago. END_OF_DOCUMENT_TOKEN_TO_BE_REPLACED

Here we have Adobe’s contribution to the ongoing Mobile World Congress. Â And what contribution it is as Adobe demoes something that might possibly give the Android platform an edge over Apple’s iPhone OS – Adobe AIR running on Droid. Â Since the demo looks quite well, Â it follows that other Android devices including Google Nexus One will be to run Adobe AIR apps as well. Likewise, Adobe also announced that Flash 10.1 will soon be available for Android devices as well as iPhone.

With Adobe AIR, developers will have access to a feature-rich environment when developing their rich applications outside the mobile browser of Android devices and on multiple operating systems via individual marketplaces and applications stores. Adobe AIR Â will bring about mobile apps that are optimized for high performance on mobile screens and takes advantage of the capabilities of native devices.

In addition, Adobe also announced that Flash 10.1 will soon be available on Android devices such as DROID and Nexus One as well as other mobile platforms including the BlackBerry, Symbian, Palm webOS and Windows Mobile. Interestingly, while the iPhone was not mentioned as part of those mobile platforms that will support, Windows Mobile was included in the list despite the fact that Microsoft may not be supporting it on Windows Mobile 7.

Or perhaps this is just a miscommnication?

Android fans, rejoice! Time Magazine has just published its Top 10 Gadgets of 2009 and surprisingly (yes it surprised me) Motorola’s “recently” released DROID is the no.1 gadget of the year. Now, how is that possible?

Or perhaps I’m not aware of how far the Moto DROID has affected the mobile consumer market. According to Time Magazine:

TheÂ Droid is a hefty beast, a metal behemoth without the gloss and finish of the iPhone, but you don’t miss it. The Droid’s touchscreen is phenomenally sharp and vivid, it has an actual physical (not great, but good enough) keyboard, and best of all, the Droid is on Verizon’s best-of-breed 3G network.

But how many users does the Moto DROID have right now? I mean, how many people have already seen if not used it?