What’s surprising is the other half of the study — that 94% of these companies have decided to go digital AND invest in social media marketing.

I once gave a talk on blogging in the workplace for an anti-virus company. The objective was to wean employees to get them to blog, which would eventually lead them (engineers) to updating their coroporate blog. During the Q&A

The never ending cycle continues. Many companies today try to invest in social media as if it were rocket science — hiring “experts” from viral agencies to do the work. This is wrong. The best candidates for handling social media roots from the company’s own payroll.

While it’s not surprising to discover that many people can’t live without their daily dose of social networking sites, some interesting statistics have emerged from the latest study by the consumer electronics shopping site Retrevo.com.

Where 56% of those who took part in the survey said they checked Facebook between one and ten times, over a quarter checked in over ten times each day. 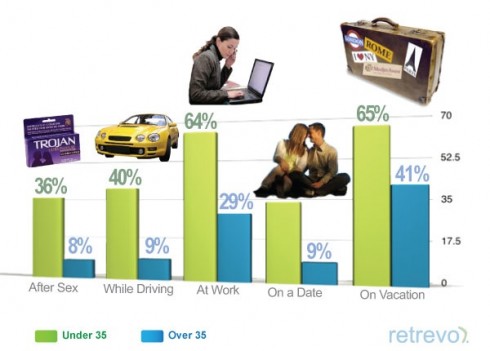 One in three under-35s texts, tweets or uses Facebook straight after sex, compared to just 8% of overâˆ’35s, while two-thirds of under-35s don’t have any problem using these services at work.

END_OF_DOCUMENT_TOKEN_TO_BE_REPLACED 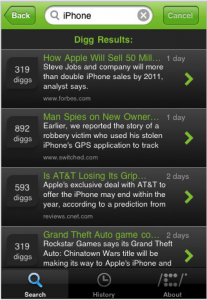 A recently launched iPhone application called Say What? allows integrated searching of Twitter, Digg, plus thousands of forums and blogs, from one interface.

iCrossing’s application has actually been freely available for about a month now, but I’ve only just discovered it.

While I personally don’t search in Digg much, the ability to search across both a significant section of the web (blogs and forums) as well as Twitter sounds appealing.

END_OF_DOCUMENT_TOKEN_TO_BE_REPLACED

If you’ve been keeping an eye on British show business over the past few days, you’ll have seen a couple of fairly minor celebrities making objectionable or suggestive statements and being lambasted for them.

Firstly Anton du Beke caused a(nother) race row at the BBC when he made a poor “joke” to his Strictly Come Dancing partner Laila Rouass.

Then, live on Saturday’s X Factor, Dannii Minogue questioned whether contestant Daryl should’ve changed the lyrics on his song because he’s bisexual.

In the second case, particularly, this sent up a flurry of activity on Twitter â€” it’s not often that something from the UK makes the trending topics so consistently â€” and elsewhere, with some of it calling for Dannii to leave the show, or at least apologise. END_OF_DOCUMENT_TOKEN_TO_BE_REPLACED

Online life management? I wouldn’t mind some of that, and newly open-to-the-public ZooLoo.com could be a solution.

Firstly, if you’re so inclined, you can host your life using ZooLoo’s services and your own domain name, making it more personal than using some-non-descript-name.forgettable-web-service.com.