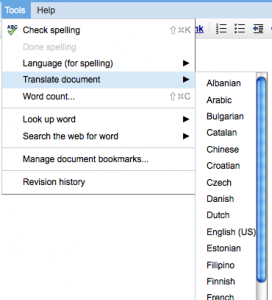 Keeping it in the family by offering cross-service functionality, Google has announced that its language translation service is now available from within Google Docs.

Forty-two different languages are supported, with document formatting preserved and the choice to either replace the original document or create a translated copy. END_OF_DOCUMENT_TOKEN_TO_BE_REPLACED

Following in the footsteps of Facebook, the popular online service Evernote is calling on its community to help translate the site into languages other than English and Russian.

The project aims to have Evernote versions available in French, German, Italian and Spanish by the end of the year, relying on users to translate as much or as little content as they want.

The online tool lets users add new translations or edit existing ones. There are also positions available for volunteer co-ordinators who will have greater responsibility for reviewing and approving translations.

If this experiment is successful, more languages will be offered up in the future.