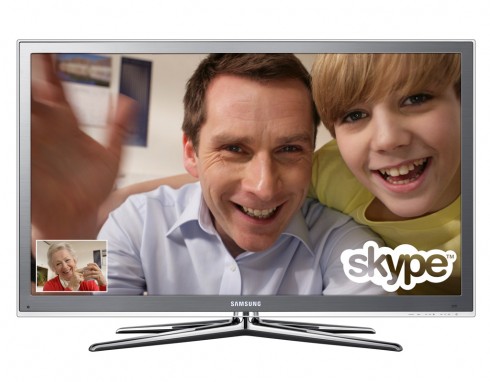 Samsung has just unveiled their latest HDTV line-up, the LED 7000 and LED 8000 series. Wait, before you stop and say that these are just another one-of-them Samsung HDTVs, well think again because they are actually not just your ordinary HDTVs. Â These HDTVs are quite unique because of the fact that they come embedded with Skype software.

Yes, folks this simply means that you can now have the comfort of making video and voice calls through these Samsung HDTVs. Do you have any idea how crisp and clear the person you are Skype-ing with would be? Well, the idea is pretty cool for me and I would love to get one of these new Samsung HDTVs. Although we may all have to wait for quite some time since Samsung is launching the new TVs worldwide sometime before the second hald of 2010.

Going back to the two Samsung LED 7000 and 8000 series TVs. These two products will come with Samsung’s free InternetTV service as well which will let you access selected online content. Â And you also need to buy the FreeTalk Â TV Camera to enable the high quality video calls. Â Voice calls on the other hand will be handled by Skype’s SILK audio codec which is capable of producing super-wideband audio quality.

If you don’t have a Skype account yet, you can create one using the TV’s remote control via the TV’s simple Skype interface. Of course, the bottomline is that voice calls and video calls will be free provide that you are communicating with another Skype user.

Cool? Yes, of course!. So, I’ll watch out for those Samsung LED HDTVs if I were you.

If the idea of talking to the camera at the back of your iPhone and then turning your iPhone as soon as you’ve spoken to see the person you’re talking to, sounds cool to you, then you might be glad to know that Fring has just enabled video calling and VoIP through 3G on their iPhone app.

Actually, this was a result of the recent announcement made by Apple opening the iPhone’s gates to VoIP calling. Interestingly, Apple made this decision even if it will affect AT&T’s revenues.

To make free voice or video calls using Fring, you simply need to fire up your Fring iPhone app and hope that the message “voip calls are not allowed…” does not appear anymore. If it does, just click “more”, then “go offline” and then open Fring again.

Meanwhile, Fring was not the first iPhone app developer who immediately took advantage of iPhone’s decision to allow VoIP calls on the iPhone. A few days ago, iCall also went live, allowing free VoIP calls for iPhone users through 3G.

Both Fring and iCall if embraced by mobile phone users would definitely make Â the Â VoIP through 3G market more exciting. Expect more mobile apps that will allow VoIP through 3G to be developed and hope that mobile carriers will not disallow this feature even if it affects part of their revenues.

Google Voice sounds like the best thing to happen to telephony since the cellphone, but it does lack one important ingredient: a softphone client. That’s about to change as Google acquires Skype competitor Gizmo5.

The obvious synergies of this deal make a Hell of a lot more sense than eBay buying Skype four years ago — and will probably produce a ton less drama. Gizmo5 may not have Skype’s enormous userbase, but Google clearly bought the VoIP service for its technology and not its userbase. Once Gizmo5 is fully integrated into Google Voice, expect Mountain View to throw its marketing muscle behind the combo.

New signups for Gizmo5 have been suspended, but expect its VoIP features to make their way into Google Voice and Google Talk in a year or two. 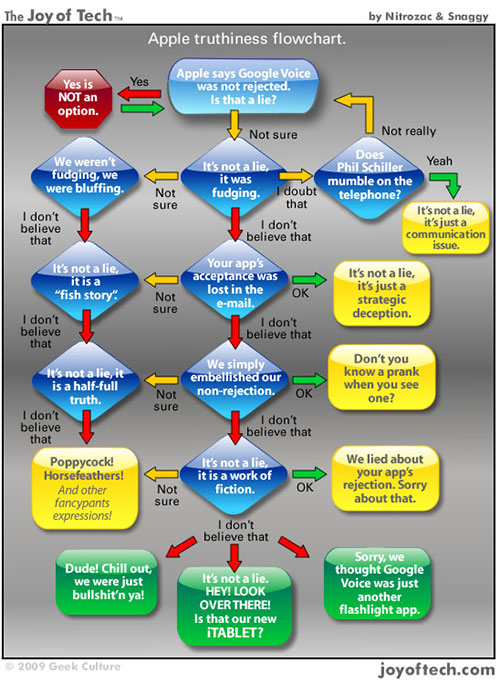 Apple’s recent lies about the rejection of the Google Voice iPhone app give us insights into their deception development process. Since this isn’t the first time they’ve been caught in a lie, the process must be pretty refined by now.

The Joy of Tech offers a flowchart of that process.