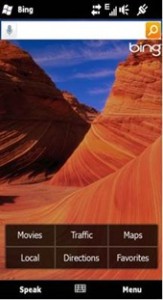 I don’t really know how many people are using Windows Mobile Phone, especially with the popularity being gained by iPhone, BlackBerry and Android phones. In case you’re using a Windows phone, you might want to check out Bing.com on your mobile phone right now. Microsoft has just updated its Bing app for Windows phone to bring in two new features – a redesigned home page and turn-by-turn navigation.

The new Bing mobile home page features better navigation to give you faster access to common Bing search verticals including Movies and Traffic.

While for turn-by-turn navigation, the new feature is being powered by Bing Maps and is being implemented through Microsoft TellMe voice applications technology. The result, according to the official Bing blog is an amazingly lifelike voice experience for the turn-by-turn feature. This feature works on Windows 6.x mobile phones only and you must have a data account with Sprint, T-Mobile or AT&T to use the voice guided navigation feature.

This navigation feature also calculates your route when giving driving directions and guide you to the fastest way possible that will get you to the place you want to go to on time if not earlier.