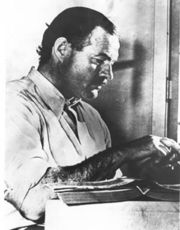 It looks like mainstream society is starting to notice (a bit belatedly) that more and more folks are conducting business out of cafes and coffee shops. The San Francisco Chronicle reports:

A new breed of worker, fueled by caffeine and using the tools of modern technology, is flourishing in the coffeehouses of San Francisco. Roaming from cafe to cafe and borrowing a name from the nomadic Arabs who wandered freely in the desert, they’ve come to be known as “bedouins.”

That’s cool that they’ve adopted a special name and all, but the last time I checked, this was not new news.

Web workers all over the world, not just San Francisco, have been using coffee houses as mission control for their businesses for as long as Wi-Fi has been in existence.

And remember when folks used to write with pen and paper and old fashioned typewriters?

The Lost Generation was one of the most famous early bedouin tribes. American ex-patriots like Ernest Hemingway, F. Scott Fitzgerald, Henry Miller and Ezra Pound were creating and collaborating in cafes in Paris and other parts of Europe in the early 1900’s.

The Lost Generation writers argued that they were not lost at all. They had found what they were looking for–a place where they could be free to create, to be left in peace, and to be amongst like-minded artists.

In one of my favorite books, A Moveable Feast, Hemingway explained the appeal of the cafe:

…The people that I liked and had not met went to the big cafes because they were lost in them and no one noticed them and they could be alone in them and be together. The big cafes were cheap then too, and all had good beer and the aperitifs cost reasonable prices that were clearly marked on the saucers that were served with them.

Yes, we love the allure of being together and alone at the same time in a crowd.

As for the “reasonable prices”, Hemingway has obviously never visited Starbucks ;-), but in comparison to buying a desk and chair and renting office space, 7 bucks for a cappuccino, a muffin and free Wi-Fi for the day seems like quite a deal. 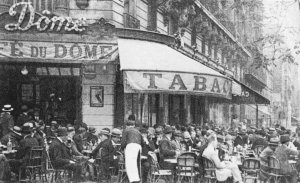 This is a photo of The Dome, the cafe in Paris that was the hot spot for the Lost Generation writers.

The Dome was the heart of the American Literary Colony. It was where young writers came as soon as they arrived in Paris. It was where they left word when they were leaving. It was the place that created and disseminated gossip. It was a living newspaper for the American expatriate community.

We virtual web workers have two places where we are free to create, to share news and gossip, to be left in peace, to be amongst like-minded thinkers, and to be together and alone in a crowd:

The neighborhood coffee house and the internet.