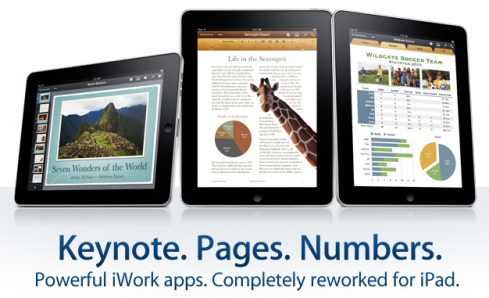 Again, Apple has launched a successful product with the iPad, agree? Ok, whether you accept it or not, the fact still remains. Apple iPad is selling like hotcakes, stocks are depleted and would be owners are eagerly awaiting for Apple to deliver their iPad. Apple could very well be on its way to earning $1 Billion in revenue by this end of this quarter alone from iPad sales.

But aside from that, Apple is not only earning so much from unit sales of the iPad alone but also from the sale of its iWork apps for the iPad. In case you’re not aware, upon release of the iPad, Apple has also released the iPad version of its popular Mac Office Suite – iWork for iPad consisting of Pages (word processing), Keynotes (presentation) and Numbers (spreadsheets).

According to Business Insider, the iWork apps are on track to potentially generate more than $40 million in annual sales after earning more than $3 million in sales in April. Essentially, Apple has not only successfully launch a new product device but also made itself as the most successful iPad developer, in terms of revenue.

Wait, how did Business Insider came up with estimate $40 million iWork revenue for Apple? Here’s the explanation:

Apple’s apps have consistently been in the top ten for paid apps since the iPad was released. Pages has been no. 1 for much of the time. All three have led the top-grossing listings as well.

So, we did some back-of-the-envelope math:

I’ll leave the analysis to you as I’m not so much into this kind of stuff.

But the important thing to note here is that with the success of the iWork, Apple is proving that the iPad is not only a content consumption device like what others may previously believed. Certainly, this is not what Apple want people to perceive the iPad is. That’s why the availability of these three iWork apps from the very beginning. Apple wants the iPad to be a content creation and productivity tool as well.

It may not be very obvious, but Apple certainly carving in the niche for the iPad which could in the long run replace the netbook market.