Today’s news headlines is definitely going to Nokia’s big surprise to date. How about this? Â – turn-by-turn navigation on all its smartphones via the new Ovi Maps available worldwide and free forever. Well not really forever I supposed. Maybe for as long as your Nokia smartphones are working and functional and for as long as Nokia keeps on creating new smartphones that you’d eventually end up buying.

So according to the news, starting March 2010, all new GPS-enabled Nokia smartphones will come installed with the new version of Ovi Maps. This means that those smartphones will be able to provide you with free global sat-nav feature, or turn-by-turn walk and drive navigational maps.

As for the current crop of Nokia smartphones, the new Nokia Ovi Maps can be immediately installed. So, if you own any of these Nokia smartphones right now, you might as well get the new Nokia Ovi Maps up and running on them. These smartphones include Nokia N97 mini, 5800 XpressMusic, 5800 Navigation Edition, E52, E55, E72, 5230, 6710 Navigator, 6730 classic and X6. And Nokia promises to add more handsets into the list. 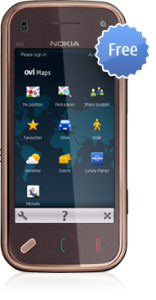 Once you’ve installed the new version of the Nokia Ovi Maps, you’d immediately have access top quality pedestrian and in-car navigation for free, no strings attached. You’ll get turn-by-turn voice guidance with smart features such as lane guidance, traffic info, safety cameras and speed warnings. The same feature is true when you are on-foot. The new Nokia Ovi Maps will give you the best shortcuts to take when going to a particular place. In addition, you’d also be given over 6,000 3D landmarks in over 200 cities worldwide.

Did yo mention that the Nokia Ovi Maps feature smart hybrid vector maps? This means that these maps are less data-heavy so it won’t be a problem storing them on your Nokia smartphones to let you use them even when your phone is offline.