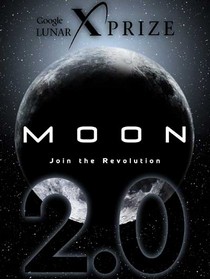 To encourage non-government and private companies worldwide who are interested in moon exploration, Google is now offering prize money worth $30 million for those who can land an unmanned robot camera on the moon and take some pictures and data.

The reward is valid until December 2012. X Prize Foundation, a non-profit group promoting technological innovation, will run the competition.

Hereâ€™s the breakdown: $20 million for vehicle that can automatically move around and transmit data. For stationary device, youâ€™ll get $5 million. Now, a jackpot of $5 million is given for going beyond the minimum requirements.

â€œThe Google Lunar X Prize calls on entrepreneurs, engineers and visionaries from around the world to return us to the lunar surface and explore this environment for the benefit of all humanity. We are confident that teams from around the world will help develop new robotic and virtual presence technology, which will dramatically reduce the cost of space exploration,â€ said Dr Peter Diamandis, chairman and chief executive of the X Prize Foundation.

What’s next for Google? They already have Google Earth, Google Sky, Google Moon, and Google Mars. Maybe they should just lump all these terrestrial and extra-terrestrial sites in just one big site and dub it as Google Galactica!