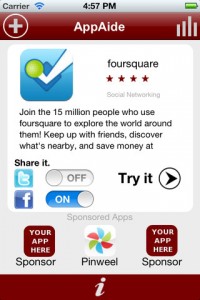 Trying to find a good app can be hard at times because you need to wade through thousands of apps that are already in the market. Fortunately, this is a predicament that has been in the minds of other app developers and it’s being addressed with, you guessed it, an app.

AppAide is an app that will make recommendations of other apps based on your actual usage. The app, which was developed by BetaBait, uses much of the same technology that is being used by BetaNoodle, a company that BetaBait acquired recently.

AppAide is not about getting the newest apps to be released. Here’s how it works. Upon downloading and installing AppAide, it will surreptitiously run in the background of your iPhone. What it will do is to track your usage of the other apps that are already installed in your iPhone. The data that AppAide compiles is then studied and from it a list of 40 trending apps is shown by AppAide to its users. So in effect, what you will see is a list of apps that people use a lot and supposedly like. This is in contrast with other app recommendation systems that show you apps based on the number of downloads – which we all know is not really quite accurate because it can be affected by marketing, PR and other factors. And being downloaded doesn’t mean it is being used often.

AppAide earns from selling sponsored slots that appear in the app. But there is talk that the data itself may be monetized in some form. The people at BetaBait are assuring users that no personal data is collected or stored, so you can rest easy your information is still safe. 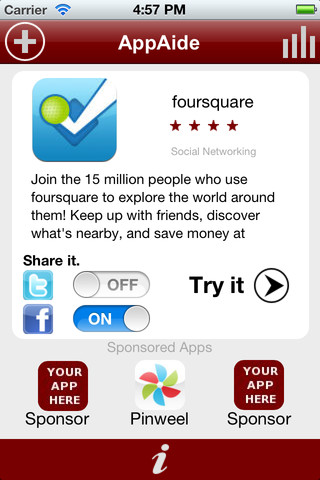