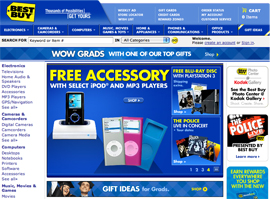 The State of Connecticut is taking Best Buy to court, accusing it of tricking customers by coming up with two-identical-looking web sites in its stores. The only difference is that one site had higher prices.

“The company commonly kept two sets of prices â€“ one on its Internet site and an often higher set on its in-store, look-alike, available on kiosks,” Blumenthal said. “The in-store site was an Internet look-alike, commonly with higher prices, which were charged to consumers. Best Buy broke its promise to give the best price. Best Buy treated its customers like suckers, not patrons to be prized. Best Buy gave consumers the worst deal: a bait-and-switch-plus scheme luring consumers into stores with promised online discounts, only to charge higher in-store prices.” Connecticut Attorney General Richard Blumenthal said.

The Connecticut lawsuit asks that Best Buy be ordered “to pay restitution to consumers who purchased products at a higher price because they were deceived by Best Buy’s misrepresentations” in addition to paying civil penalties.