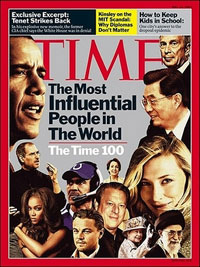 US President George W. Bush has been dropped from Time magazine’s list of the world’s 100 most influential people. Sasha Baron Cohen (better known as “Borat“), Justin Timberlake, and Rosie O’Donnell all made it to the list that included 71 men and 29 women from 27 countries.

“I think Bush by this point in his presidency probably has less influence than the position should grant him automatically,” Time’s Deputy Managing Editor Adi Ignatius said in explaining the non-inclusion of Bush.

The list, which is designed to recognize “the men and women whose power, talent or moral example is transforming our world,” does not appear in any order or give the magazine’s reasons why some people were chosen over others.