LG Electronics (LG) and YouTube announced an agreement to provide YouTube services on its handsets, allowing users to view videos and easily upload them directly to YouTube.com. For upcoming YouTube-enabled handsets, LG will apply a new user interface for easily accessing and uploading video content. LGâ€™s YouTube-enabled handsets will be available worldwide starting at end of this year.

“This new service will connect people like never before. For the first time, LG customers will be able to film, upload and view videos on YouTube using their mobile phone just as they would be able to from their home computer,” said Dr. Skott Ahn, President and CEO of LG Electronics Mobile Communications Company. “With this agreement, LG is continuing to drive forward wireless internet services as well as consolidate its technology leadership in the mobile industry.”

LG first announced its agreement to pre-install Googleâ€™s services on its handsets in March 2007. As a first step in this partnership, LG recently launched the LG-KS10, which features Google search, Gmail for mobile, and Google Maps for mobile. The LG-KS10 first hit shelves in Italy this past April.

Kilar, 36 years old, joins NBC and News Corp starting July 9 after nearly a decade of being a key executive at Amazon.

“Jason’s product and consumer expertise in the world of e-commerce is arguably unrivaled in this business and gives him a great insight into what it takes to create a superior user interface,” Peter Chernin, President and COO of News Corp. “We already have access to world-class content and near ubiquitous distribution, and the next step is marrying it with the features and tools that will help define the ideal user experience for video content on the web. We think Jason is the ideal person to lead that effort.”

Meanwhile, this online video venture to be headed by Kilar debuts later this year and is said to surprise us with thousands of hours of full-length programming, movies and clips from various networks and film studios. Partnering with Yahoo, AOL, Microsoft, MySpace, CNet, Comcast, among others, they are said to have access to about 98% of the monthly unique users on the Internet in US alone. 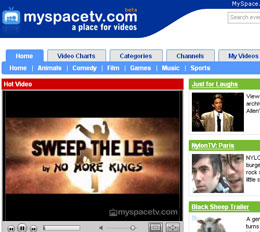 Independent from its popular social network, MySpaceTV allows users to share and watch video even if they do not have MySpace accounts. This new video site will combine personal and licensed videos, as well as the recently launched Minisodes Network which features mini episodes from classic TV hits by Sony Pictures.

A recent ComScore study shows that MySpace is currently the second-largest Internet video site, getting about 38% of the market, next to YouTube’s 44%. MySpaceTV is geared towards matching what YouTube offers.

This video-sharing platform will be launched in 15 countries and seven languages, and the company repoted to have negotiated with 25 content providers already for brnaded channels. Later on, users will also be able to edit videos within the platform.

BBC Global News will publish up to 30 news clips per day, with up-to-the- minute news and analysis from around the world. A dedicated channel has been created on YouTube called “BBC World News.”

“We’re excited to support BBC Global News as they expand their distribution of broadband video to YouTube and other outlets,” said Marty Roberts, vice president of marketing for thePlatform. “By using our mpsConnect service, BBC Global News and other media companies will reduce the technical complexity of these distribution agreements, allowing them to focus on capturing new digital media syndication opportunities.” 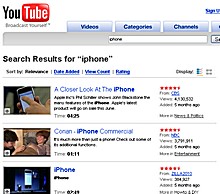 iPhone users will have access to YouTube‘s originally-created content. A new Apple-designed application on iPhone will wirelessly stream YouTube’s content to iPhone over Wi-Fi or EDGE networks and play it on iPhone’s stunning 3.5 inch display.

To achieve higher video quality and longer battery life on mobile devices, YouTube has begun encoding their videos in the advanced H.264 format, and iPhone will be the first mobile device to use the H.264-encoded videos. Over 10,000 videos will be available on June 29, and YouTube willbe adding more each week until their full catalog of videos is available in the H.264 format this fall.

“iPhone delivers the best YouTube mobile experience by far,” said Steve Jobs, Apple’s CEO. “Now users can enjoy YouTube wherever they are-on their iPhone, on their Mac or on a widescreen TV in their living room with Apple TV.”