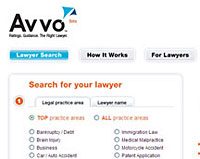 Web start up Avvo, a new find a lawyer search engine we profiled earlier this month, has come under fire from some in the legal community who claim the site is unfair and highly deceptive. One of those lawyers, managing partner of Hagens Berman Sobol Shapiro Steven W. Berman, has filed a proposed nationwide class-action lawsuit on behalf of other attorneys.

The suit, filed in U.S. District Court in Seattle, alleges Avvo “violates unfair methods of competition and deceptive acts in the conduct of commerce as stated in the Washington Consumer Protection Act.” Specifically, Berman said, he and other lawyers find the site’s rating methodology prone to error and wide open to manipulation,

In a cited example “Bellevue attorney Enrico Salvatore Leo listed an award he earned in 2006 for his athletic prowess in playing recreational softball. His score immediately jumped despite the fact that the achievement had nothing to do with his practice. Before removing the listing, he added a second softball award which caused his score to again increase.”

The complaint also cites rating trends involving Avvo insiders. “While the site claims to be an unbiased system, Deborah Rhodes, an Avvo board member and Stanford ethics professor scored a perfect 10, while the dean of the Stanford law school scored significantly lower,” the suit states.

Avvo, in its defense, has posted a statement on their blog about the lawsuit. They say “this lawsuit is an effort to censor and to chill Avvoâ€™s analysis, commentary and opinion in order to protect attorneys who have disciplinary actions in their backgrounds. It seems to reflect a belief, on behalf of the lawyers bringing this lawsuit, that the First Amendment doesnâ€™t apply to the dissemination of opinions and information about them.”