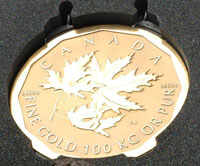 How would you like to own a pizza-sized gold coin? If you are the highest bidder in the upcoming online auction put on by Escala Group, a global collectibles company in stamps, coins and militaria, you will.

The coin, which will be on auction beginning August 16, is a 100 kilogram coin published by the Royal Canadian Mint. It weighs over 220 pounds contains more than $2 million of gold bullion. The auction coincides with the launch of Teletrade Direct, a new service to sell gold, silver and platinum bullion coins.