In case you missed it, Wal-Mart has launched a video download service, the first service to provide content from all 6 major movie studios. Reuters even goes as leading with the headline that the service is a “game changer”. They are right, but for the wrong reason. It’s a game changer because it doesn’t work with Firefox, and one would presume other non IE browsers such as Opera, Safari and Konquerer as well, it only works with Internet Explorer: 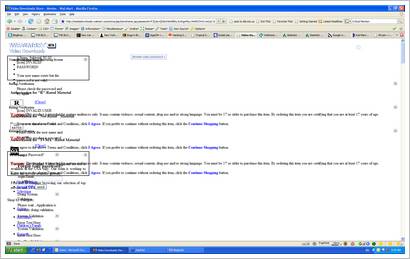 Valleywag and Techcrunch have also picked up on this, but questions still remain: why would Wal-Mart launch as service that only works in IE? how could a company as big as Wal-Mart overlook Firefox, particularly given they’ve previously been the leading distributor of the Linux distro Linspire…which doesn’t run IE?

I’ve never believed in accidents. People who crash their cars don’t have accidents, it’s usually driver error, there’s always an equatable cause or reason for the so-called accident, and I find it hard to believe that Wal-Mart accidently forgot standards/ Firefox support with their new offering. Is some sort of tie in with Microsoft behind it? Is it something to do with DRM and the intention to not support open source browsers because of some sort of potential risk? There’s got to be something to it, after all, what web designer worth his grain of salt doesn’t use Firefox, or at least has a copy of Firefox handy for site testing? Food for thought.

The LA Times reports that content such as a local news story about fire safety would be offered to bloggers and other web site owners, with the bonus of a revenue sharing model that would see some of the profits from advertising either imbedded or with in the story shared with the sites showing it.

The deal is a positive step forward in providing a legal framework for content sharing, at a time when companies such as Viacom are actually going in the opposite direction and threatening fans with DMCA notices, often without grounds.

It’s also a clever move by Fox, extending the reach of local TV station content to a global audience which previously had no access to it.

(via The Blogging Journalist)

Warner Music Group and Last.fm, one of the leading Web 2.0 social music sites, have signed a deal to allow Warner’s entire music catalogue to be played legally on the Last.fm streaming service.

Last.fm is similar to Pandora (my personal favorite in this space) in that it recommends songs by tracking your music-playing habits and suggests and plays new music based on other users with similar tastes.

According to Reuters, Last.fm co-founder Martin Stiksel said the site was in were in talks with the other three major labels and content holders.

“Black Blogs”, blogs that partake in “questionable materials” such as “sexual images and language” have resulted in a new investigation into this perverted form of internet abuse by the Investigation Agency of the Vietnamese Ministry of Culture.

According to Vietnam Net Bridge, Mr. Vu Xuan Thanh, Chief Investigator for the Ministry, said that blogs in Vietnam are growing too fast for the Ministry of Culture and Information to manage and that consequently, the agency has recently dispatched a team to research blogs in order to find out ways for the Government to manage them.

He noted that although blogs are not illegal in Vietnam, that Regulation 55 and Circular 02 issued by the Ministry of Culture and Information prohibits Internet content that are the opposite to social and Communist Party values.

Blogs noted as containing “questionable material” include a blog by “Lustful Gentleman”, who is rather impartial to sex, and another blog by the name of “conxionâ€™s world” who has “sexual pictures” some of which “are too much for words”.

For all the suspicion and potential conflicts of interest in the past, TechCrunch’s Michael Arrington proves he’s all class, and indeed one of the good guys with this post where he links to a new site called Michael Arrington Sucks. It takes a depth of character to be able to link to something like this, particularly when the combatants are playing the man with the site title as opposed to the site (TechCrunch) itself. Of course the odds are firmly in Arringtons favor given how long other anti-TechCrunch/ Arrington sites have lasted. Perhaps a strategy in turning a spotlight on the new guys, betting that they won’t be able to handle the pressure? who knows, but it will be one to watch. I give them 2 months :-)