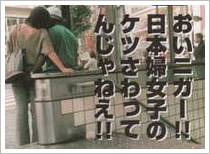 According to a Bloomberg Report, a magazine titled “Gaihin Hanzai Ura Fairu” or “Secret Foreigner Crimes”, includes a cover in red and black with caricatured images of foreigners grinning manically with glowing red eyes, and includes articles such as “Chase the Iranian!” and as Joi Ito recently noted on his blog, a photo (above right) with the caption “”Oi Nigger! Don’t be touching a Japanese girl’s ass!”.

Japanese firm FamilyMart has stopped selling the magazine following customer complaints, however it is still available for purchase from Amazon.co.jp and Seven and Y Corp, an online bookshop 50.8% owned by Seven-Eleven and 31.3% by Yahoo!. 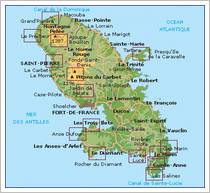 A resident of the French dependency Martinique has been charged with incitement to murder following posts he made to his blog calling on all gay people to be killed “without exception” along with a number of gay media and government personalities.

The Advocate reports that the man surrendered to Fort-de-France police Friday and was held in custody for two days before being released on bail.

The investigation included the Atlanta Police force, as the man is alleged to have made his posts whilst visiting there.

Journalists are lazy. OK, maybe not all journalists, the journalists you probably read online with the big tech and MSM sites aren’t, but they make up only a small number of all journalists, and as someone who once dealt with journalists daily as part of my then job, most of them are. But come to think of it, you do naturally expect better from the “big name” journalists, particularly those writing for well regarded sites such as MarketWatch. Unfortunately Frank Barnako doesn’t reach the standard, with this piece on Australian company/ portal Sitepoint.

Screen shot attached, just in case he reads this and takes it down, or corrects most of it.

Let’s start from the top, shall we:

You won’t find blogs for sale on eBay, but there is a marketplace for Web blogs. Hundreds are being sold monthly through a little-known two-year-old auction service based in Vancouver, Canada.

Um, you see blogs for sale on eBay regularly…but apparently there’s a marketplace for Web blogs (Web blogs…WTF??). Hundreds are being sold…really, I watch Sitepoint every single day, yes, blogs come up for sale, but not 100s….a little-known two year old auction service based in Vancouver Canada…WTF? Sitepoint is a registered Australian company/ portal as is clearly indicated on their about page (they’re based in Melbourne BTW), and little known? The site was launched with its current name in 1999, oh, and it ranks at 263 on Alexa. Marketwatch ranks at 615.

Matt Mickiewicz, co-founder of SitePoint Pty. Ltd. said his recent offering of BlogCatalog.com drew a winning bid of $40,000 in less than 24 hours. “There were seven backup offers and two higher than that, trying to break the deal,” he said in an interview. Other sales have included the Blog Watch Network, Biziki and College-Startup.com.

Sitepoint used BlogCatalog as a proud example in their press release, so it’s not entirely Frank’s fault, but BlogCatalog isn’t a blog. It’s a directory. Blog Watch Network? ROFL, I think he means Blog Network Watch.

Each month, about 400 blogs are offered for sale through SitePoint Marketplace at a flat fee of $20 per listing. “Most sell in a couple of weeks,” Mickiewicz said. Custom designed software handles the sale process providing for private messages and forums for questions and answers.

I’ve got no idea where the 400 figure comes from, but that equates to nearly 100 per week. Maybe I’m visiting the wrong Sitepoint? Custom software, aren’t these guys using a hacked version of Vbulletin? Most sell in weeks: most auctions I’ve been watching lately at Sitepoint don’t even get a bid.

I could go on, I won’t, but I will finish with this. I don’t want to slag Sitepoint off, because they do a very good job, generally speaking, but when it comes to a fluid marketplace, Sitepoint isn’t it. What they have done, in part due to their listing fees, is cornered the top end of the market, not only in blogs but all websites. Top quality sites sell on Sitepoint, sites $5-10k and up. At the bottom end of the market, Sitepoint literally killed it and drove everyone to Digital Point. You’re not going to sell a site cheaply when there’s a $20 listing fee, sure it’s not much, but if you’re only looking for $50-$100 for your site, $20 takes a big chunk. Cheap blogs and sites are nearly always the domain now of Digital Point, where personally I’ve picked up a couple of bargains lately. But I digress. Sloppy journalism Frank Barnako. A little fact checking wouldn’t have gone astray.

UK outfit SpinVox has announced the launch of “Speak-a-Blog”, a voice to text tool that allows users to blog via voice from a mobile phone.

The service works through using SpinVox’s current voice to text technology, and is currently compatible with Blogger, LiveJournal and Vox, although other blogging platforms may be supported by a “generic” option.

The pitch is to bloggers who don’t have easy access to a computer when they are on the move, and who can’t be bothered trying to type a blog entry into a mobile phone (and I know what they mean by that one).

The service is currently only available to UK residents, however the company is taking registrations of interest from non UK users. A free 1 week trial is available, after that plans start at 3 pounds ($5.90 US) for 10 posts.

In another case of all that is old is new again, users of Google’s Blogger service are unhappy (again), complaining that the service has suffered from repeated outages, feature malfunctions and data loss.

Computerworld reports that the problems are “particularly frustrating” to bloggers who recently migrated to the latest version of blogging on the expectation that the new platform would be more reliable than the old platform, which had a history of…. repeated outages, feature malfunctions and data loss.

Are you a non spam blogging Blogger user suffering problems with the service, let us know, I’m sure we can find someone to fix the problem for you…with WordPress :-)

*Yes, I’ve taken the liberty of juicing the story up a little bit, after all, who wants to read the exact same story that has been covered extensively every year, and just about every single month since Google bought Blogger. Nothing changes, but I would like to see a Matt Cutts gremlin :-)