Its mission is simple and wrapped up with its motto: “Share a story. Change a life.” Happy Posts has struck a chord with the Internet community as the new hangout place for positive and uplifting content. The site, a radical change from what normally is seen online, is an open forum for people to share positive stories from their lives.

“Every day, we are hit from all sides with negativity,” said Mark Hager, founder of Happy Posts. “We wanted to create a place where anyone from any background could tell about the good things that happen to them. We’re not concerned about where you’re from, what you do or what you believe,” Hager said when asked about their target demographics. “We’re looking to create a grass-roots movement with the sole purpose of creating the world’s largest repository of every day miracles.”

Splash News and Picture Agency, Bauer-Griffin, Insight News and Features, Flynet Pictures, and London Entertainment Pictures filed the lawsuit in the federal district court in California, claiming more than 25 counts of infringement. The group is asking for $7 million in damages. Ouch!

“Perez has achieved his fame and fortune by unlawfully taking and exploiting other people’s work,” said Splash News’s CEO Gary Morgan in a post on the company’s blog. “Using someone else’s only means of earning money to make yourself rich at their expense is most un-American.”

“The black community needs a blog of its own like Stereohyped,” says editor Lauren Williams. “Whether we’re dealing with the Don Imus scandal or
potentially welcoming the first black president with Barack Obama, African-American readers are craving a news and entertainment site that’s entirely dedicated to them. Nowhere else on the web is there something like Stereohyped.”

“Launching a blog for the black community just makes sense,” says Stereohyped’s publisher David Hauslaib. “We’re heading into this with creative people holding degrees in African-American Studies, an appetite for informed analysis, and plenty of experience with gossip,” he says. “We’re bringing a great editorial mix to Stereohyped. And in the end, serving our black readership will matter most.” 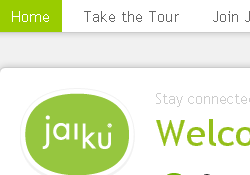 Twitter fans may be upset by this, but even though I like Twitter-watching, I don’t tweetr all that much. The feature set doesn’t suit me. I do maintain a Twitter feed and follow about 25 Twitterers, but I find the 140 character limit restrictive. I’m also an RSS evangelist elsewhere, so any new application that allows web feed importing/ aggregation catches my attention.

I’ve recently come across Tumblr, which is more like mini-blogging than the micro-blogging of Twitter. It lets you add images, video, quotes, links, IM chat text, and regular posts. It also lets you import feeds, including your Twitter feed. Except that there are no social features. Soon, but not yet.

Then there’s Jaiku, which like Tumblr lets you import feeds. Jaiku also differs from Twitter in that you can add an image or an icon (from presets) to distinguish your current activities. Your Jaiku stream’s background color can be set as well. It’s all eye candy, sure, but Jaiku is both more customizable and more robust than Twitter. It does not have quite the same feature set as Tumblr in terms of the type of content you can quickly post. So it is micro-blogging like Twitter. However, Jaiku has stronger social features than Twitter, including being able to get “presence” information about your friends: availability, location, calendar – providing they are running Jaiku Mobile on their phone.

Ken Camp, a VoIP blogger who writes a great deal about mobile presence applications,  refers to Jaiku as a lifestream aggregator. (I’m sure someone else made the same comment about another tool, but I can’t find it.) Its tie-in with mobile devices make it more appealing to some people, though you can use it just from a regular web browser. Something for everyone.

Now I should point out that Jaiku, like Twitter, does have a 140 character limit for each message. However, in Jaiku you can add comments to each message. Oddly enough, if you comment in your own message, you can exceed the 140 character limit. What’s really odd, though, is that this comment then shows up in your Jaiku stream completely intact. (You can also comment on other Jaiku users’ messages.) So comments on your Jaiku messages “live” in two places.

It seems to me, then, that Jaiku is a far more robust variation of Twitter. I kind of wish, though, that Tumblr had their social networking features already because my feeling is that it would then be the better of the three choices. Oh, and of course, there’s a Jaiku API, so that if you get the urge, you can come up with your own Jaiku-based applications and mashups.

By the way, if you want to publish a lifestream but don’t feel like signing up for yet more web services, there’s hope. If you’re running a WordPress blog, you can use Elliot Back’s WP Lifestream plugin to create a lifestream on your site. Here is BinaryBonsai’s lifestream, as an example.

The Blog Herald’s editor Tony Hung wrote about Blogger & Podcaster, the trade magazine that covers blogging and podcasting, being launched. The online version of the magazine’s first issue is now finally up. Impressive at 48 pages, its content and online presentation makes plus the fact of being the first issue makes it a compelling read. We say, not bad and looking forward to next issue.

Read the first issue it here.