SEOpedia is reporting that Digg is now banning users who Digg stories too many stories too quickly without actually viewing or reading the content. This is something that has long been advocated for by the community, particularly when the community sees spam reach the Digg homepage, before they can bury it.

Myself and others have noted that they are several legitimate reasons to not click a link and read or view the content of a Digg submission. However, the explanation given for this banning by Digg makes it appear as though the user was regularly digging stories at a volume and rate at which they were clearly either too lazy to read beyond the title and description, or that they were simply gaming the system and inappropriately inflating digg counts. The latter wouldn’t be very surprising given that I have witnessed my fair share of SEO circle jerk gaming on Digg, especially considering the banned user was part of this SEO’s discussion group.

Your account was banned for the rate of Digging activity youâ€™ve engaged in. Weâ€™ve determined that the time in which your Diggs happen, it isnâ€™t possible to actually read the stories. Please read each and every story before you Digg or bury a story. Once you agree that you will Digg/bury more responsibly and read the stories, we will unban your account.

Digg founder Kevin Rose took the opportunity to answer questions the community had after this news hit Digg.

This is extremely rare. We have automated systems that flag abnormal digging behavior (eg. hundreds of diggs in an hour). If the user is banned due to an alarm being set off – in all cases, they are given an opportunity to be re-instated. We strive to keep digg as bot free as possible.

When asked how to get an account reinstated, Kevin replied, “Just email us.”

This automated system appears to be intended catch bots that are used to game the system, but can likewise be used to catch diggers who do the same thing manually. Digg will continue to develop algorithms to detect and prevent diggers from misusing or abusing the system, as they become a greater target crossing the chasm into mainstream culture.

The Internet’s success is largely attributable to the lack of government intervention in it. The online population has proven themselves capable of self-governance, yet governments persistently attempt to control it. In the United States, the lack of government control over the Internet has allowed it to remain a largely uncensored medium of communications. Government regulation combined with capitalism’s influence in communication mediums historically have proven dangerous to their continued success, and prime example of this is television.

Today we face a growing threat to the democratic nature of the Internet, as all Internet Service Providers (ISPs) last week had to meet the mandate put forth by the Communications Assistance for Law Enforcement Act (CALEA) to allow the FBI to wiretap all Internet users. This includes the ability to wiretap Voice Over Internet Protocal (VoIP) services. The use of wiretapping on the Internet will be limited to those who have obtained court warrants to do so, but nonetheless this is setting a dangerous precedent.

As ZeroPaid.com points out, this will become a tool of surveillance in an increasingly Orwellian society that has already forsaken to many freedoms for a little temporary safety. While surely incidents of Internet surveillance go on in secrecy, this mandate now legalizes the act, and makes it all the more simplified. They furthermore rightly suspected, as did I, that the MPAA and RIAA will lobby for to use this new ability to wiretap suspected file-sharers. It should come as no surprise that they won this right.

The real danger comes when the FBI and corporations abuse this new ability by manipulatively using techniques such as heresay to take the place of actual evidence and reason to qualify as probable cause, or even more dangerously foregoing probable cause all together when obtaining a court issued warrant. This will most certainly happen as many lawsuits placed by the RIAA and MPAA couldn’t win an argument for reasonable suspicion, a far weaker standard of evidence.

While it may sound rash, I think we are on the brink of watching the Internet suffer the same fate as television. This could be the beginning of the end for the Internet as we know it. More and more net governance laws are being created, which seek to further regulate and control this seemingly uncontrolled communications medium. Make no mistake, this is only the beginning of far stricter net governance and surveillance. Governments and corporations alike greatly fear the Internet, and rightly so, as it puts the power back in the people’s hands and that’s the last thing they want to see happen. They will do everything they can to gain the control over the Internet that they have on television.

If we want to enjoy the continued uncensored, unregulated democratic nature of the Internet, it is incumbent upon us to do everything in our power to retain the integrity of the Internet.

A study conducted by Pew Internet & American Life Project called, A Typology of Information and Communication Technology Users, shows how people use technology to socially interact with others, as reported by News.com.

Their findings clearly show that despite adults accessibility and capability to use various forms of technology for communications purposes, very few engage in public forms of communication. They instead use private means of communication, such as cell phone text messaging and online instant messaging. This seems to be indicative of the generational divide, where the older generations value their personal privacy far more than the younger generations, who actively engage in social networking sites that broadcast personal information and communication in a more public manner.

With all the venture capital funding being thrown at new Web 2.0 start ups, if they fail to market themselves to the broader Internet population they will find that they can’t become successful enough to meet the expectations of investors and may end up shutting down.

This study’s findings could be significant in terms of the success or failure of social networking sites and the Web 2.0 movement as a whole. If the Web 2.0 movement continues to be unable to market beyond the younger generations and the tech savvy demographics, then their ability for market growth will be significantly limited, which could ultimately signal the bursting of the bubble for Web 2.0. 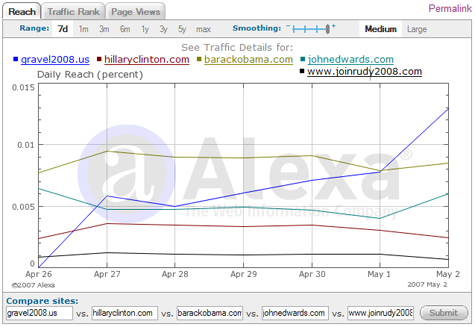 This bill comes 6 months after the controversial Unlawful Internet Gambling Enforcement Act of 2006 was passed into law. The Internet Gambling Prohibition Act received a lot of criticism for infringing on American freedoms and is equated with censorship.

In a quote from CNet’s News.com article, Barney Frank dissented upon the current law, saying:

Furthermore Frank points out that since almost all states have legalized some form of gambling that we should hold the same precedent to their online counterparts.