The company’s new portal provides a single web-based management facility for Pandora resellers, who will now be able to conveniently track their leads and generate electronic quotes. Pandora Networks’ partners can also access Worksmart product and training manuals, submit feature requests, or track their own customers’ support cases. With instant updates from the portal, resellers will be able to manage the lead-to-customer sales process more quickly. 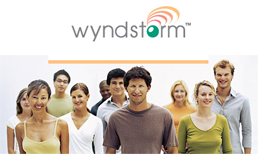 YFonGlobal, a leading social networking enabler, added a high value benefit to their wyndstorm social network suite by providing the first click-to-call feature to its latest hosted social network, entitled MyGK, the private online member community tailored for The Golden Key Society. With this feature, Golden Key will be able to provide its 1.7 million members worldwide a free online buddy calling service between its members.

“wyndstorm continues to lead the industry in providing social networks that are tailored for specific requirements of a private member community-and free buddy calling is a high value feature,” said Marian Sabety, President and CEO of YFonGlobal.

Developed through the company’s partnership with CounterPath Solutions, the leading provider of VoIP (Voice over IP) and Video over IP softphones, the click-to-call feature enables wyndstorm to seamlessly synchronize the community member directory with CounterPath’s softphone application, allowing members to communicate quickly and easily. Whenever a MyGK member adds a favorite friend to their personal space in the community, that friend automatically appears in the click-to-call / IM (Instant Message) contact list in the application. The friend can then “see” his buddy’s availability for a call, and the two buddies can then call each other-whether they are Windows PC or Mac users.

Raketu, a provider of voice over Internet protocol (VoIP) telephony services, unveiled today a Web-based offering which requires no software to conduct VoIP calls. RakWeb looks to be available now.

RakWeb, according to Raketu, runs over any Internet connection from broadband to dial-up service and offers consumers three options for accessing their RakOut Dial-Out account and free to cost VoIP calling rates globally. The service reportedly combines “features Of Skype And JaJah”, which are rival VoIP services. Consumers visit the Raketu Web site to enter their phone number and that of the destination number.

One interesting feature of note is that since RakWeb doesn’t require downloaded software one can make calls from almost any OS platform, including Mac, Windows and Linux.

The Internet’s success is largely attributable to the lack of government intervention in it. The online population has proven themselves capable of self-governance, yet governments persistently attempt to control it. In the United States, the lack of government control over the Internet has allowed it to remain a largely uncensored medium of communications. Government regulation combined with capitalism’s influence in communication mediums historically have proven dangerous to their continued success, and prime example of this is television.

Today we face a growing threat to the democratic nature of the Internet, as all Internet Service Providers (ISPs) last week had to meet the mandate put forth by the Communications Assistance for Law Enforcement Act (CALEA) to allow the FBI to wiretap all Internet users. This includes the ability to wiretap Voice Over Internet Protocal (VoIP) services. The use of wiretapping on the Internet will be limited to those who have obtained court warrants to do so, but nonetheless this is setting a dangerous precedent.

As ZeroPaid.com points out, this will become a tool of surveillance in an increasingly Orwellian society that has already forsaken to many freedoms for a little temporary safety. While surely incidents of Internet surveillance go on in secrecy, this mandate now legalizes the act, and makes it all the more simplified. They furthermore rightly suspected, as did I, that the MPAA and RIAA will lobby for to use this new ability to wiretap suspected file-sharers. It should come as no surprise that they won this right.

The real danger comes when the FBI and corporations abuse this new ability by manipulatively using techniques such as heresay to take the place of actual evidence and reason to qualify as probable cause, or even more dangerously foregoing probable cause all together when obtaining a court issued warrant. This will most certainly happen as many lawsuits placed by the RIAA and MPAA couldn’t win an argument for reasonable suspicion, a far weaker standard of evidence.

While it may sound rash, I think we are on the brink of watching the Internet suffer the same fate as television. This could be the beginning of the end for the Internet as we know it. More and more net governance laws are being created, which seek to further regulate and control this seemingly uncontrolled communications medium. Make no mistake, this is only the beginning of far stricter net governance and surveillance. Governments and corporations alike greatly fear the Internet, and rightly so, as it puts the power back in the people’s hands and that’s the last thing they want to see happen. They will do everything they can to gain the control over the Internet that they have on television.

If we want to enjoy the continued uncensored, unregulated democratic nature of the Internet, it is incumbent upon us to do everything in our power to retain the integrity of the Internet. 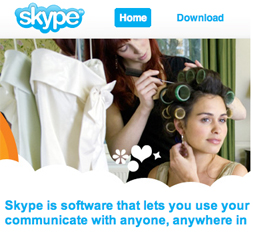 Skype announced that it is teaming up with Wal-Mart, the worldâ€™s largest retailer, to address the growing popularity and demand for Internet communications among U.S. consumers. Starting today, Wal-Mart is offering Skype Certified hardware in the Internet and voice communications area of 1,800 of its stores throughout the country, providing more opportunity and accessibility for people looking for affordable calling options. This partnership gives shoppers immediate hands-on access to headsets, webcams and handsets designed to work with Skype, as well as the first pre-paid cards for Skype available in the U.S.

â€œWe applaud Wal-Mart for recognizing the popularity of Skype and making it more accessible to Wal-Mart shoppers. This relationship with Wal-Mart will increase exposure for Skype and our hardware partners in a single dedicated Internet communications section. Our research suggests that when users add a Skype Certified accessory like a headset, handset or webcam, it greatly enhances their experience and they use Skype more to connect with family, friends and business colleagues,â€ said Don Albert, vice president and general manager of Skype North America. END_OF_DOCUMENT_TOKEN_TO_BE_REPLACED