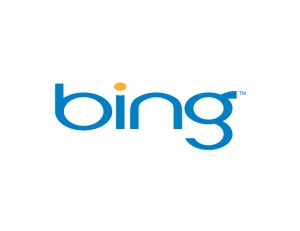 However as far as global domination goes, it looks like Bing! just stole the silver from Yahoo! (at least according to one stat company).

Its research armÂ StatCounter Global Stats finds that globally Bing reached 4.37% in February ahead of Yahoo! at 3.93%. Both trail far behind Google’s 89.94% of the global search engine market.

In the United States Yahoo! at 9.74% still retains its lead over Bing at 9.03%. Google’s share in the US is 79.63%. In July 2009 Microsoft announced an agreement whereby Bing would power the Yahoo! search technology. This has been implemented in the US, Canada, Australia, Brazil and Mexico. (StatCounter Global Stats).

Microsoft has made some impressive strides in their attempt to steal the gold from Google, including partnering with Facebook as well as launching some humorous commercials on TV to raise awareness of Microsoft’s “decision engine.”

While it’s only a matter of time before more searches in the US are done through Bing.com than Yahoo.com, Microsoft has a long ways to go before they can catch up to Google in the US (as well as globally as well).

Instead of mimickingÂ Google’s insta-search (which would probably be a huge engineering challenge in of itself), Microsoft has decided to “out Google” Google by leverage the one asset the search giant has been unable to obtain.

A few months ago, we announced an excitingÂ partnership with Facebook to make search more social. As part of that work, we introducedÂ Liked Results, which promotes links your friends have publicly liked or shared via Facebook. Today we are extending Liked Results to annotate any of the URLs returned by our algorithmic search resultsÂ to all users in the US.

If your friends have publicly liked or shared any of the algorithmic search results shown on Bing, we will now surface them right below the result.Â (Bing! Community Blog)

Combined with the partnership with Twitter, Bing! is as close to a social search engine as we will probably see in the next few years (provided Facebook doesn’t launch their own competing engine).

Unfortunately once again this is only available for American users, although hopefully the company will consider expanding this feature to the rest of the planet as Facebook’s user base extends beyond the shores of the US.

While their rival Google can rely upon its superior resources (not to mention tapping into Twitter as well), the search giant’s lack of a decent social graph could prove to be a major hurdle down the road as users rely more upon social friends than sophisticated machines to filter their search queries. 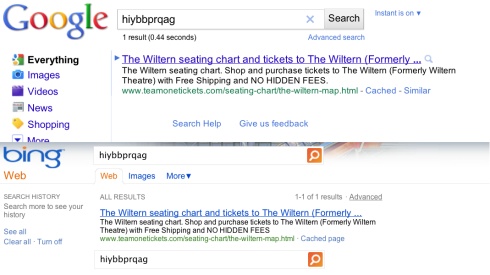 ApparentlyÂ assimilatingÂ Yahoo! and embracing a more social search wasn’t enough for Bing! to compete against the search engine giant as Google has provided “evidence” that Bing! is copying their search results.

In order to verify their suspicions, Google created 100 synthetic queries (all containing made up gibberish) in order to prove whether or not Microsoft was indeed copying their search query.

We gave 20 of our engineers laptops with a fresh install of Microsoft Windows running Internet Explorer 8 with Bing Toolbar installed. As part of the install process, we opted in to the â€œSuggested Sitesâ€ feature of IE8, and we accepted the default options for the Bing Toolbar.

We asked these engineers to enter the synthetic queries into the search box on the Google home page, and click on the results, i.e., the results we inserted. We were surprised that within a couple weeks of starting this experiment, our inserted results started appearing in Bing. (Official Google Blog)

According to Search Engine Land, Bing! readily admitted that they were using data from the Bing! Toolbar although Microsoft did not seem to show any remorse for using the information as a way to improve their search engine (which probably means that this practice will continue).

While I personally could not verify whether Bing! was indeed copying their rival (in fact I ironically found Bing!’s search queries to be worse than Google’s), this new revelation doesn’t help improve Bing!’s image overall which may convince consumers to stick with Google out of sympathy.

Google has not indicated whether or not they will sue Microsoft regarding this issue, however if left unchallenged Bing! will be able to catch up to Google (quality wise) which could threaten search engine giant’s dominance (not to mention their future revenues as well).

Dear Bing!, we have a problem. Despite the fact that you were able toÂ assimilateÂ Yahoo! search (without having to buy the whole company), you are still falling behind your number one nemesis, Google.

Not only has Google come out with Instant Search, but now they are already rolling out their preview feature to the masses.

Instant Previews provides a graphic overview of a search result and highlights the most relevant sections, making finding the right page as quick and easy as flipping through a magazine. To use it, click once on the magnifying glass next to the title of any search result and a visual overview of the page will appear on the right. From there, hover your cursor over any other result to see a preview. (Official Google Blog)

Although Microsoft could simply hire a few extra engineers to create the same exact thing upon Bing!, it might be a better idea to acquire a startup by the name of Snap Shots instead. END_OF_DOCUMENT_TOKEN_TO_BE_REPLACED 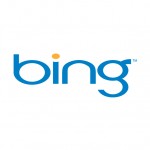 Unless you live outside of the geek-o-sphere, you probably did not realize that Mozilla recently added Bing! as a search option to Firefox.

Today Bing andÂ Firefox announced that Bing will be included as one of the search engine choices within Firefox on both the Mac and PC.

Weâ€™re very excited to be included in the search engine choices in the upcoming version of Firefox.Â  Having Bing in the â€œout of the boxâ€ list makes it easier than ever for the Firefox community to experience the benefits of Bing.

We expect the Bing option to show up in an upcoming build of Firefox 4. (Bing! Community Blog) END_OF_DOCUMENT_TOKEN_TO_BE_REPLACED